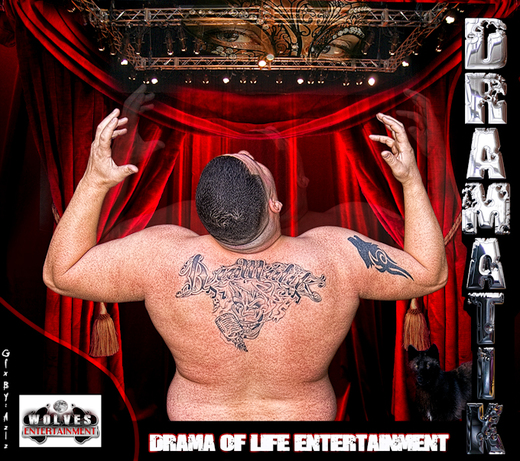 Hailing from the City of Lawrence, Ma A.K.A Law-Town DraMatik’s life journey has developed his unique dramaturgic style. As a kid, Andres Gonzalez grew up in the Philadelphia and New Jersey projects. Most of his time was spent getting into trouble and beefing with his three older sisters. One of whom was a DJ which exposed DraMatik to music at young age. He learned to appreciate everything from Rock & Roll to Mo-Town. Eventually it was his mothers fleeing from an abusive relationship that forced her to bring DraMa to Lawrence.

Coming up in the golden age of Hip-Hop DraMatik was first enticed to the scene by such great artist as KRS-One, Chuck D and EPMD. An interest in writing poetry soon evolved into flowing. While banging on the streets DraMatik ended up in the hospital with a gunshot wound to the chest. Faced with the fact that his own young son could become just another ghetto bastard, he had the motivation to make the right change and focus on music as an alternate choice to street violence.

The evolution from Andres to DraMatik began when he met great local artists Scientifik (R.I.P), Edo OG, and Krumb Snatcha who inspired him to work hard and make his own mark on the game. Joining the group Missing Elements was relevant to his development as an artist but when the group disbanded he was left to his own devices. A few battles generated some buzz in the underground and caught the ear of Krumb Snatcha. He was offered a spot on the W.O.L.V.E.S. (Warriors Organizing Lives Values Escaping Struggle) label where he met Itchy Finga, the W.O.L.V.E.S. lieutenant who with the help of K.S. enhanced the unique DraMatik Style we’ve come to know. Now we unleash upon you the style and story that is DraMatik.

You can see DraMatik in action with his videos for Streetlife, All Eyes on Her, Do You Remember, Solitude and Walk with Me at www.facebook.com/DraMatikwolf  He also debuted his directorial skills in Krumb Snatcha’s video; The East is Back.  www.youtube.com/dramawolf  as well as with the W.O.L.V.E.S on I.T.I.S & Burning Down check the W.O.L.V.E.S on www.facebook.com/wolvesgang

DraMatik recently fused an unlikely masterpiece of acoustic guitar, folk, hip hop beats and urban lyrics with his latest project, The Swell Season Hip Hop (www.facebook.com/swellseasonofhiphop)which was inspired by the award winning movie Once. This Project is out now so pick it up.

DraMatik  continues to stay on his grind with several projects in the works such as the recently dropped FREE CD DraMatik collabo’s ft up and coming artist from the New England area,  The X-Periment; a GC Classics collaboration (www.myspace.com/shitontheindustry).  A new Brother Hood of the Wolf hosted by Statik Selectah and A Wu-Tang Management W.O.L.V.E.S CD Called Warlords hosted by DJ Red Diamond; a ground breaking project sure to leave its mark with Blaze Infamous called The Re-Animators which takes music’s greatest hits from all genres and imbibes it with hip hop flavor for the new millennium, and finally the highly anticipated solo Street Album DraMa of Life.