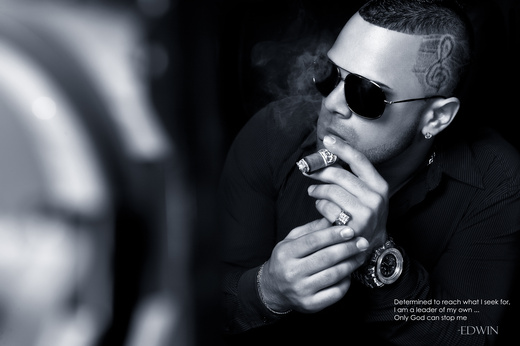 Born in Puerto Rico to Christian parents and raised to the sounds of gospel music, Edwin Omar Velazquez combines his love for music and his experience gained from his High School Band days as a Percusionist and a Trombone player to pursue a career as an artist. Determined to fullfill his father’s dying wish, Edwin's family moved to New York and on that road Edwin became a musician at his church. This love of music led him to seek a Bachelors degree in Audio Recording Engineer and Music Business from the prestigious Five Towns College, which earned him a degree with the highest honors.

It was at this very moment that his church noticed his skills and determination and they decided to put him in charge of their entire production. This led Edwin to meet Juan Vargas (aka Doble J) who as a songwriter and keyboardist observed Edwin’s talent and decided to combine their talents to take each other’s career a step further.

As of today Edwin and Doble J have produced many up and coming artists under their production company EV MUSIC. Edwin now works as a producer out of New York’s Legendary Power House Studios (Home to Alicia Keys, Vico C, Huey Dunbar and Frankie Negron amongst others). He also teaches music theory at Harlem’s Children Zone Academy and has been in the studio day and night producing his forthcoming album titled “The Beginning”.

With hot singles on the street like “Aqui Estoy” and his Spanish Remix of “Hold Yuh”, Edwin is getting recognition from top djs all over including, NY's Hot 97 and NY’s number one Latin Station La Mega 97.9fm. If you’re into great music and love incredible performances then Edwin without a doubt is the artists to go with. Dominating nightclub shows and harbor exclusive parties from New York to Miami Edwin’s buzz is spreading like an out of control virus. Be sure to keep and eye on this individual because once he goes mainstream you’re going to want to be involved.