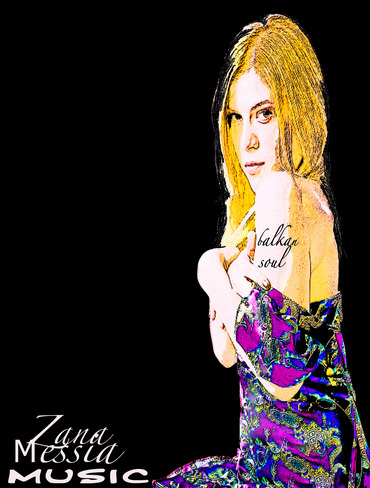 An established performer across the Balkans, Zana Messia has gained a solid reputation as a singer-songwriter, appearing regularly on screen, stage and radio. Her voice embodies the spirit and emotion of Balkan Roma music and flirts with Jazz.  The result is a pure cross-cultural blend of the traditional and contemporary, with influences that stay true to her rich Balkan roots.

Currently her band, The Balkan Soul Orchestra is working on their debut album. World-renowned musicians, such as drummer Harvey Mason,  multi instrumentalist Daniel Weinstein and accordionist Nick Ariondo are featured on the record.

The sound of The Balkan Soul Orchestra is organic world fusion, combining elements of Balkan Roma music and jazz. The debut album has been described as a post modern phenomenon, reflecting the Shrinking Planet, where cultures collide and mix and new future emerges.

In Los Angeles, the band has had many notable performances at well known venues and festivals.

Zana recently placed her music in several domestic and internationally released feature films.  Her song, "If You're Wondering", featured in the motion picture "The Lightkeepers", was submitted to AMPAS for consideration as "Best Original Song" in the 2010 Academy Awards.

Zana also has a new placement in the soon to be released movie "Flying Lessons".

Zana's background is a whirlwind ride. She spent her early childhood in Mostar in former Yugoslavia, learning to play piano and winning local talent contests. Her musical sensibilities were quickly curtailed at the age of 11 when war broke out in Bosnia/Herzegovina. Her family was forced to flee as refugees to Sweden. Despite the upheaval, Zana resumed her music studies and her talent soon came to the attention of world-renowned jazz pianist and vocal coach, Steven A. Garrick. He took the precocious singer under his wing tutoring her until his untimely passing when Zana was just 13. Undeterred by the loss of her mentor, she recorded her first demo at the age of 15, and immediately landed a record offer with Sony Music Sweden.

By 16 she had performed in front of a television audience of 20,000 in Sarajevo.

Zana's two pop-flavored releases, “Gotta Stop” and “Talk to Me”,  Universal Music Group have drawn attention of many magazines and radio stations. Her songs have been released on Universal, Sony BMG and Virgin EMI.

In 2006, Zana moved back to her war-shattered hometown Mostar to study the folklore and music of her ancestry and work as Musical Director at the United World College before moving to Los Angeles in 2009.

Balkan Soul (to be released) 2012 by Zana Messia Music