About A Candle Lit City

We are an Alternative/Metal band from Houston, Texas! Managed by Quenton Delaney of DJQ Artist Management.
The band A Candle Lit City is brought to you by the city of Houston, from the great state of Texas. Starting back in 2008, the band immediately began making a name for itself locally by playing many gigs with several signed bands on their passing tours. This earned A Candle Lit City the rep

utation that they are known for today: a heavy sounding band with songs that are different from beginning to end and lyrics that really hit close to home. After releasing several singles along the way, the band finally delivered the impression they have always wanted to make by producing the EP "A Light In The Dark" in summer of 2011; a 7-track EP that defined the direction that the band was going for musically and earned the band all of it's die-hard fans

The EP was recorded in the bands very own studio at Wave Audio Recordings Studio; owned and operated by the bands Vocalist/Rhythm Guitarist Wade Concienne. After production, the EP was released and the band was contacted about several offers from notable Karl Ackermann of Monolith Management (Matchless Records), Joey Matthews of Red Cord Records, Jeff Dinter of Embassy Interactive, Neil Ballard of BERMA Clothing, Quenton Delaney of DJQ Artist Management, Brian Hood of 456 Recordings Studio and many more. With all the positive feedback and strong drive supported by the EP, the band set out to earn a name for the city of Houston. The band began touring the state of Texas, for the first time in the bands existence, to play shows in cities such as New Braunfels, San Antonio, Galveston, etc. What came next for the band was to be selected to perform on the Vans Warped Tour 2012 on Ernie Ball Stage in San Antonio, Texas

New hopes rise for the band, as they have recently teamed up with Quenton Delaney (DJQ Artist Management) to start out big Fall of 2012. Their newest single "Hourglass" has recently been recorded with Brian Hood of 456 Recordings Studios (Erra and Before there was Rosalyn ) and is due to be released available for download on iTunes in 2012

A Candle Lit City is the strongest it has ever been, and is eager to come out even stronger in the year of 2013 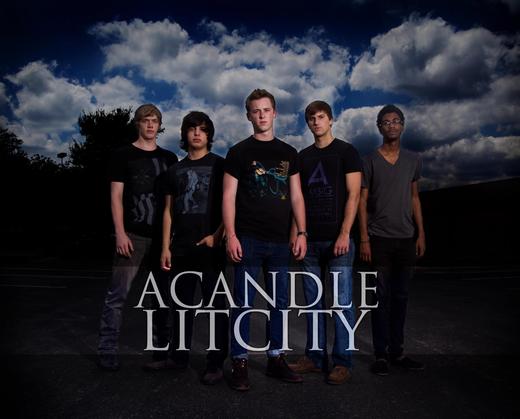