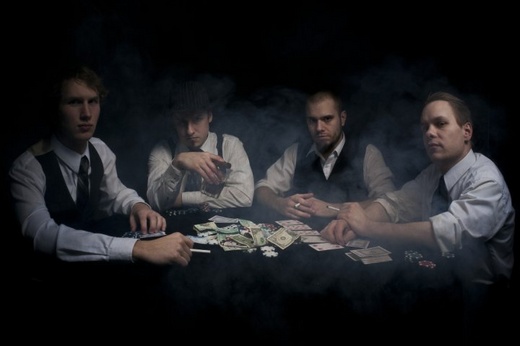 About All Else Fails

Playing an aggressively dark blend of Punk, Metal, and Rock, this well established Edmonton based band breaks the traditional ideals of their genre by producing music infused with experimental elements, incorporating Classical music, Electronica influenced synth lines, and spoken word sampling. This is metal for a new audience, one that’s ready for what’s beyond the ordinary.

Their inspired high-energy live show sets them apart from their peers, often drawing comparisons to The Holly Springs Disaster and Killswitch Engage.

The band’s unique sound has won them acclamation and fans from across Canada and around the globe. Using intricate guitar riffs and meaningful lyrics delivered with powerful vocals, they draw their listeners in, and then blast them with full frontal force!

On the local circuit via their indie label Suicidal Bride Records, All Else Fails frequently shares the stage with some of Canada’s top touring indie acts such as Ninjaspy, Endast, Quartered, Stella, Dead Jesus, Fattooth, Gentlemen Prefer Blondes, Submerge the Sky, Without Mercy, and more.

AEF have several tours under their belt including a 2009 Cross Canada tour, western Canada in June of 2010, and coast to coast Canadian tour again in September of 2010 which saw them placed on not just one showcase at Indie Week in Toronto, but so impressing organizers of the event that they received an invitation to play a second showcase that week.

2011 is a year full of promise for the band with an aggressive plan to increase touring, building on the wave of new fans that were created on previous tours, as well as new recordings and a music video. All Else Fails will be reaching beyond borders this year, ready to set the world in flames!

Suicidal Bride Records and SIN Agency are proud to bring you “All Else Fails”!