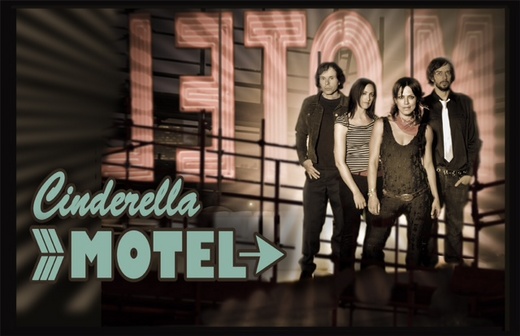 Cinderella MOTEL spawned from Tammy Tomahawk’s penchant for expecting the unexpected. A post-punk/garage rock phenomenon composed of four eccentric staff members, Cinderella MOTEL is a combo of wailing, distorted guitars, John Bonham-esque drums, heavy fuzz bass, the occasional punk accordion, and growling, howling, yet feminine vocals. In the dusty, mysterious lobby of Cinderella MOTEL, one may very well run into the old loves like Siouxsie, Iggy, and Bikini Kill. Just past the front desk near the ice machine, you may find the new infatuations like Peaches, Jesus Lizard, PJ Harvey--even David Lynch. The lobby smells of nostalgia, wild nights, risk, adventure, and scandal. There is an impulsion to DO, to GO.

The staff of Cinderella MOTEL started out very small, with only Tomahawk providing the entertainment and drummer Raul Guerrero holding it all together. However, in response to general motel needs, they expanded the staff and welcomed “Captain” Jen Whittenburg on bass and, more recently, Janice F’n Reid on lead guitar.

CM’s actual creation of their own genre and their captivating, antic-filled live show has led them to be cited on Deli Magazine’s LA Top Indie Post-Punk/Noise Rock list.
Receiving regular airplay from area college radio stations, the SESAC-signed Cinderella MOTEL has been involved with programs and sponsorships with Microsoft, Bristol’s 6 (Nippies), Flopiwear and most recently, was selected to be on the ‘Rockers for Life” compilation CD that raises drunk driving awareness and was awarded 1st prize in D’Addario’s “Rock the Roxy “ Contest.

The foursome has a full-length album and a short film in the works, which will be representative of the full staff and its inherent eccentricity.