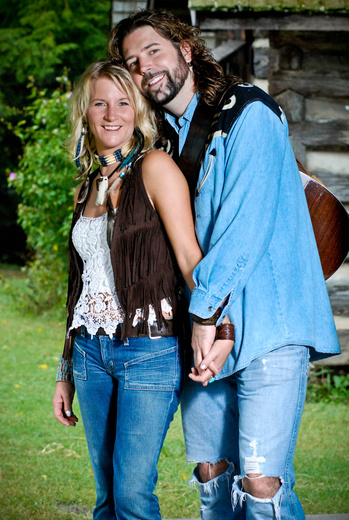 2 Souls 1 Mind is a country music duo out of Nashville, Tennessee that is comprised of Frank Michaels and Kat Lee Jones.  Michaels is an experienced guitar player and songwriter with a rocking country voice coming from Downers Grove, Illinois.  Jones is a very well respected singer/songwriter from Belgium, with a sultry vocal and an amazing stage presence.  The two of them together bring an electric performance to the stage that has had Music City audiences dancing for the past two years.  Their chemistry on stage can only be trumped by their chemistry off stage, as they are married
2 Souls 1 Mind is currently working on their first studio project, and just finished recording their first single entitled “A Little Crazy’s Kinda Nice.”  The duo is currently playing the Nashville circuit, perfecting their performance before they tour the rest of the United States.  2 Souls 1 Mind is also planning a European tour within the next year
Frank Michaels and Kat Lee Jones met in 2008, when Jones was performing at Fan Fair in the Nashville area.  “I’m a little left of center, a little off like a crooked picture that everybody wants to fix,” is how Michaels describes himself in the first single they recorded, which was written by Patrick Jason Mathews and Rebecca Lynn Howard.  In the same song, Jones depicts herself as:  “I’m a different kind of bird, singing songs nobody ever heard, misunderstood most of the time.”  The both of them agree that they chose the single because it is so true to who they are individually, and why they work so well together as a couple
Frank Michaels and Kat Lee Jones are both members of the Country Music Association.  Michaels has been on stage opening for acts such as Joe Nichols, Steve Wariner, and Joey and Rory, just to name a few.  He also spent two months touring with Kat Lee Jones in Europe, where they also performed live over Holland country radio.  Kat Lee Jones has performed with many different European bands including Punk With Purge, Red Zebra, Mrs. Nice Guy and Angel Eyes.  She also has performed backing vocals for Joe Cocker and the Laatste Show Band, and Bruno Deneckere in the Ancienne Belgique in Brussels
2 Souls 1 Mind is an amazing duo that is sure to make waves not only on the United States country charts, but also with country music audiences around the world.  Their chemistry on stage can be compared to that of some of the greatest duos of this musical era.  Big things, bright lights and beautiful harmony:  This is what we can expect from Nashville’s 2 Souls 1 Mind.
-Mike Kuhl, 2011