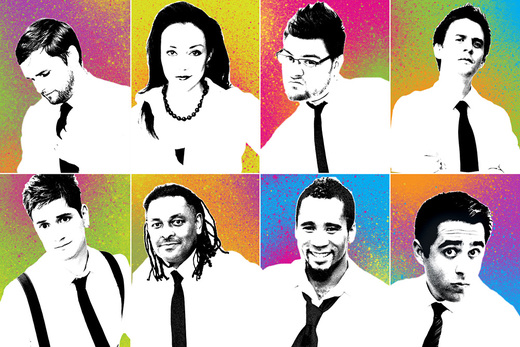 Bop Skizzum’s music is all about fusion… Gathering inspiration from every corner of the record store, the band meshes their alternative pop-rock vibe with groove-based funk, dance and hip-hop influences, creating an invigorating blend of unique instrumentation and phenomenal vocals to complete their sound. The diversity each musician brings to this eclectic mix resonates in the music that Bop Skizzum has written for their first full-length album “Coloradical.”

Music is Colorful! Music is Radical! We believe “Coloradical” is an energy, an intangible electricity; embodying the funky, fun spirit of Bop Skizzum which fans of all ages have become so passionate about. Infusing the songs on THIS album with each BAND member’s varied musical backgrounds and influences has resulted in a collection of 10 new songs which SPAN a wide spectrum of genres. “Coloradical” is the ultimate expression of diversity, personifying Bop Skizzum’s unique sound.

Denver School Of The Arts trained singer Julie Almeria fronts Bop Skizzum as the lead vocalist. Julie’s unique voice and incredible energy on stage capture your attention, as she takes the audience on the musical adventure that is Bop Skizzum. The band’s newest member, emcee and percussionist Shane “SF1” Franklin (also a DSA graduate) continued his education at Berklee College of Music before heading back to Colorado to pursue his music career. Guitar & back-up vocals are handled mightily by band founder Andy “Rok” Guerrero; formerly of the socio-political hip-hop rock band Flobots. Fellow co-founder and the band’s Music Director Serafin Sanchez provides one of the ‘brass voices’ in Bop Skizzum with both tenor and baritone saxophones; he is a CU Boulder graduate with a Master’s Degree in Jazz Music. This inspiring songwriting quartet is grounded by the incredible rhythm section, with groove master Chris Harris on Bass. Rounding out the brass section are the two-man trumpet power-punch of Joe Ferrone and John Lake.

Bop Skizzum’s music is unlike any other bands on the scene right now. High-energy grooves, an eclectic mix of vocal styles, and a virtuoso horn section make their sound unique, all while keeping the beat ultra-funky! Whatever the need, Skizzum can fill it, from gut-wrenching ballads to the hippest party track. Bop Skizzum represents not only great times on stage or in the recording booth, but a new direction in pop music – a fusion of the hottest sounds played by real, superlative musicians. So put on your Coloradical dancin’ shoes and prepare yourself to get Bop’d by the Skizzum!

* Bop Skizzum was one of 11 bands chosen (from amongst nearly 1000) for Ford’s “Gimme The Gig 2” contest, to fly to LA & perform for Grammy Award winning Producer Don Was (who has worked with John Mayer, Bonnie Raitt, The Rolling Stones.) The band’s live performance & interviews were then featured on a TV show entitled “Gimme The Gig” airing on KTLA in Los Angeles as well as in San Francisco, Portland & more prominent markets to come over this next year.

* The Band celebrated the Holidays by playing @ The OGDEN with One Republic, The Fray, & Matt Morris for the 1st Annual Acoustic Christmas Benefit Concert which raised almost $100,000.00 for the Food Bank Of The Rockies, Denver Santa Claus Shop & Children’s Hospital

* Bop Skizzum was named “Best Funk Band” by Westword readers for a 2nd year in a row in June 2012.

* Bop Skizzum held their first NERD PROM @ The Gothic, in February 2012. The event was a smashing success with hundreds of music loving geeks showing up in their best “gee, wish I was going to Comic Con” gear – ready to get their groove on! This was the first Skizzum show which included Live Tweeting during the concert. The #NerdProm reached 112,467 Twitter Accounts, made 1,454,831 Impressions & both #NerdProm & #BopSkizzum ended up Trending in the Top 10. Bottom line, Nerds Rule!

* During the past two years the band has made a huge stir both locally and nationally, performing at venues across the USA ranging from…. Playing for 7,000+ people at Red Rocks Amphitheater in Colorado, to packed houses at world famous clubs The Mint & The Roxy in Los Angeles, CA,

* Bop Skizzum garnered a spot in Westword’s Favorite Denver Releases of 2010 with their first ep PUSH.

* The band made the cut for Channel 93.3 KTCL radio contest Hometown for the Holidays with their single “I’m So Much Cooler”.

* Selected as one of a few bands out of 700 nationwide to play at the closing night party for LA’s New Music Seminar at The Roxy.

* In their first year as a newly formed band, Bop Skizzum has already rocked for over 10,000 people, performing in packed clubs, backyard parties (shut down by the police of course) and huge amphitheaters.