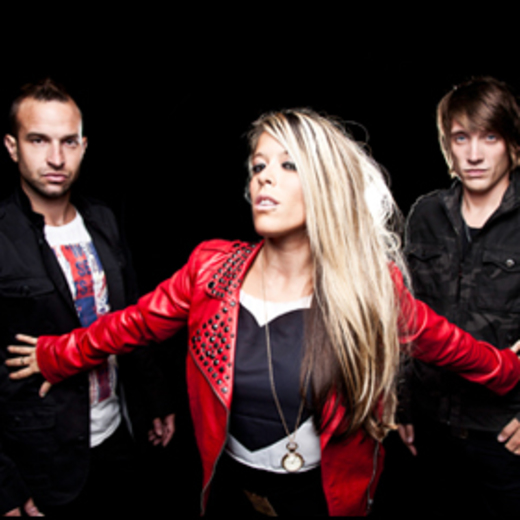 The 4 members of the Long Island based rock band Blameshift have been blazing their independent path across the nation over the better part of 5 years, logging well over 150,000 miles of touring terrain. During that time the band could easily have taught a collegiate level course on band survival. With a high powered list of sponsors, their music as a full time job and a tour bus, (a literal bus), powered by vegetable oil, the band headed from New York to Los Angeles once again. After performing at NAMM 2012 then tackling the entire west coast on the Awake the State Tour, Blameshift entered the studio with producer Erik Ron (VersaEmerge, Good Charlotte, Panic at the Disco). What resulted was the full commercially driven sound that Blameshift has been envisioning since their inception

The hype began about a year ago to date when the band released their EP The Black Rose, a record fully funded by the bands loyal fans through a site called kickstarter.com. To return the favor the band offered a 100% free EP download in exchange for a facebook "like." Over 75 related music media outlets, including Taco Bell and Sullen Clothing, supported the bands release, landing them thousands of new facebook likes and spreading the music further than they thought possible

Soon after that release the band shot a music video with director Jay Sansone for their single "Ghost" off the Black Rose. As timing would have it Hot Topic coined the band Unsigned Band of the Month for August 2011 along with premiering the new music video. Within a very short time the band had over 80,000 hits as channels like BlankTV began pushing it as well. As "Ghost" became ever so popular it began climbing the charts into the top 10 at both alternative addiction radio & Ourstage.com Rock charts. MTV featured two songs from band on the hit seriers "The Real World” soon after their music video started making waves. To top it all, the youtube gaming world began using “Ghost” in montages for the game Call of Duty, reaching over 1.5 million views, making Blameshift an official youtube partner

Blameshift just got back from a 4 month tour around the entire US. After playing numerous showcases at SXSW 2012 the band made is back to NY, only to find out they hit the road again for the summer with Straight Line Stitch. Expect their new release this summer and their touring to become even more vigorous as momentum continues to build for this soon to be house hold name