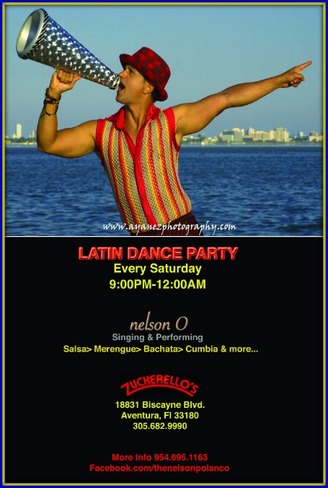 The charismatic Nelson Polanco was born to be a performer! Since the age of 3, he used to get up on tables to sing, and dance for any willing audience. Growing up in his native country of Dominican Republic, he sang and danced lots of salsa, merengue, son, guaracha, bachata. His early influences includes Celia Cruz, Johnny Ventura, Juan Luis Guerra, Olga Tañon among others.

Nelson has been writing and singing his own songs all his life. In 2008, he his dreams became a reality as he recorded and released his first professional single “Caña Dulce” This song about all different types of longing is a spicy blend of merengue & reggaeton with a hint of salsa and has been receiving a lot of attention from a variety of Latin and dance music web blogs.

“Caña Dulce” was produced by Pete Masitti at West End Studios. Masitti has worked with and produced for such artists such as Gloria Estefan, Shakira and Luis Miguel.