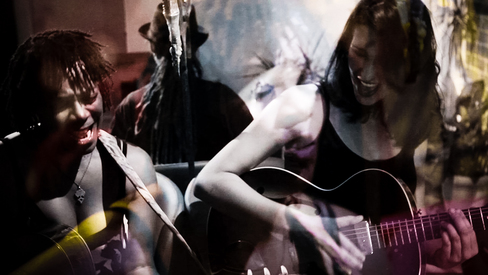 Is in most part, an original acoustic trio, consisting of 3 vocals 2 guitars, acoustic bass, snare and a cymbal. Flavoured with, Jazz, Blues, Folk, Reggae and  a bit of Rap, their originals are soul felt. ¨Covers¨, in English, French and Spanish, done so with a unique style.

Amanda Strawn is a seasoned singer and musician originally from Los Angeles, has been involved in music for 40 years. She has lived through  the evolution of music and has been influenced by al genres. Her “Dark Chocolate" voice”,  is not only warm and soothing but  powerful and soulful, taking you on a journey through her soul.

Karushka Moon is a young musician influenced by spanish and latin music. Along the way she met Amanda, and became her voice student. Realizing her Unique style, in not only her playing, but singing as well. She brings to the trio an innocence that is inspiring.

Chris Léger comes  from generations of drummers. What makes him the perfect addition to Strawn & Moon ( -Man) is his gentle persuassion of "groove",  that drives this Dynamic, Artistic Trio.

Despite their different musical backgrounds they found a way to be one...