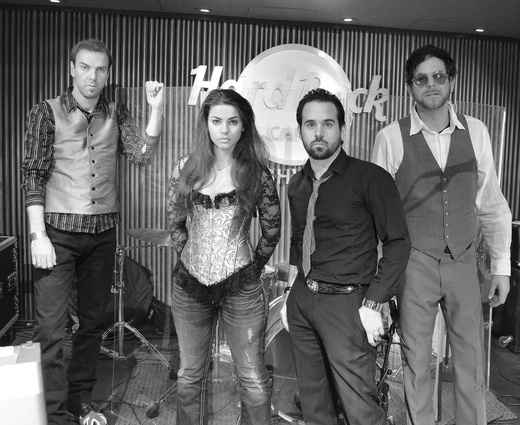 With a signature sound of dark, lush instrumentation combined with pensive lyrics, a unique blend of art-rock has emerged. Hailing from East Nashville, Tennessee, the collective is led by enigmatic songwriter Bradley Boyer and vocalist-pianist Angelika Scoggins. Joining to build this ornately complex wall of sound is a small collective of passionate musicians who share a love for playing heavy-yet-atmospheric songs, which take you on an adventure from high-energy anthems to melodramatic ballads. Based in the heart of 5-points in East Nashville, the band often features a Cellist or string duo alongside ambient vintage film footage flickering behind the band live.

Creating enchanting music without boundaries, they playfully blurs the lines between alternative, indie pop and post rock. Their live performance is all about telling a story, while exploring new sonic and visual film territory together. Inspired by larger than life characters such as pop artist Andy Warhol, to vocalists such as Jeff Buckley and Morrissey; the band fully understand the power of iconography in music.

June 2009, their self-released EP "Damiana's Dream" carries you into a five song melodrama. Soaked with cello, synths and a thick dose of layered guitars; each song carries you into another time and place. Their first single "Ghost inside your house" received a Billboard World Songwriter award. Their chameleon-like creation of grandiose art rock music is both endearing and inspiring.

New EP single "Damiana's Winter" due out Fall of 2010 to be followed by a new music video and a long awaited debut album, which is rumored to be Boyers best life works to date.