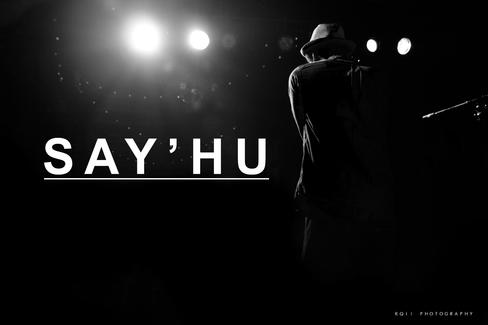 Saihou Ceesay (born September 4, 1992), better known by his stage name Say’hu (pronounce Say-who), is a Gambian American hip-hop recording artist from Charlotte, North Carolina. Say’hu first received recognition in 2012, following the quiet release of his 2012-debut mixtape The Other Side. Shortly after the release of The Other Side, Say’hu released his very first visual to standout track ‘Motherland’ which eloquently paints a picture of Africa, casting an unflinching eye on its troubled past and current circumstances. On his 21st birthday, Say’hu released his second effort, Living Room Sessions EP, in 2013.

Say’hu was born in Atlanta, GA on September 4, 1992 to Gambian immigrant parents. Although he was born in the States, the majority of his early childhood and adolescent days were spent on the smiling coast of Africa. His childhood revolved around a love for soccer and music. Upon graduating from high school, he moved back to the U.S. to further his studies. In the summer of 2010, Say’hu attended Central Piedmont Community College, where he obtained an Associate’s degree. He later went on to transfer to the University of North Carolina where he earned his Bachelor’s degree in Communications.

His music stresses many issues including: capitalism, poverty, war and is often loaded with witty metaphors and heart felt messages with which everyone can relate. With his musical roots being in Hip Hop, and most important source of inspiration, he cites artist such as 2-pac, Jay-Z, J. Cole, K’naan & Fugees as key influences in his own pursuit of musical recognition.

Say'hu is gearing up for future recordings and gaining experience by performing gigs and building his resume as an artist. From packed college auditoriums to local venues, he also opened for Oakland's own G-Eazy. With the pragmatic detachment of today’s DIY, socially mediated industry, his undeniable gift as a musician promises a long and successful future.

"I am grateful for the universal nature of music," he once said. “It is made everywhere, by anyone, in as many ways as the human heart can feel. As I see it, if it touches the heart, it's good music. That's what I want to make."