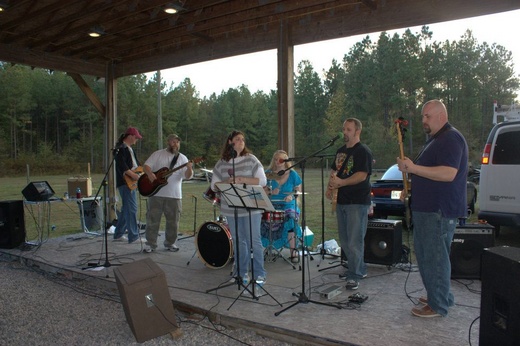 Check out some different songs we recorded at band practice on our youtube page at:

We're just a little old six piece band, been playing together for the better part of a year now. Don, the singer, writer and lead guitar, Joe, the rhythm guitar, Heather, our drummer, Ray, our bass player, John on acoustic and backing vocal, and Julia our female vocalist and backup singer. We have an eclectic range of original songs, with influences ranging from bluegrass to early southern rock. We're a project borne from the lack of traditional country/ honky tonk music here in the heart of the old Confederacy. Basically, we're just here for a good time and a little feedback and to see what else is out in the interweb. Our songs are recorded in front of a home computer on some pretty bare bones equipment, which, so far, has done alright. We're big fans of older country prior to disco country and a fair amount of the stuff coming out of Austin. It'd be fair to say we're not really big fans of modern Nashville/ Top 40 stuff, but that's just us. Hope you all enjoy, and please feel free to comment, it's always nice to get outside opinions. Thanks again, and happy listening!
« View This Artist's Complete Profile
Connect with OurStage: Facebook Twitter YouTube FourSquare Newsletter RSS feed
ADVERTISEMENT
?Need help?
Copyright © Amazing Media Group  2006-2022
p
A
n
E
F
Song Title by Artist Name