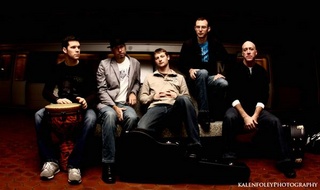 An energetic 5-piece piano/guitar modern rock band. The List is Steven Wright on lead vocals/guitar; Tim Young on lead guitar/vocals; Steve Mead on piano/guitar/vocals; Eric Grabow on Bass, and Danny Sullivan on Drums and backing vocals.
The group formed in the fall of 2008, and have quickly built a strong local following with attention from Sony/RCA and well-respected rock producer John Krauss of the award-winning Cue Studios in Falls Church, VA. The band has been playing shows throughout MD, DC, VA, and NJ, while completing their first album–recorded in New York’s Head Gear studios with Engineer/Producer Ted Young (The Magic Shop, NY), and Stan Green (Omega Studios, MD). Due in Summer-2009, the album “By The Time You Read This…” embodies a sound that Wright describes as “music that spans generations, giving everyone a chance to enjoy what we spent so much time creating.”

As the List’s base of popularity only continues to grow, it inspired front man Steven Wright to comment that his ultimate vision for the band comes down to a desire to “be remembered and make a difference in the musical world in some way or another. We want someone to come up to us and say that our music helped them in some way…whether it was getting them through a hard time or just helps them relax.”
« View This Artist's Complete Profile
Connect with OurStage: Facebook Twitter YouTube FourSquare Newsletter RSS feed
ADVERTISEMENT
?Need help?
Copyright © Amazing Media Group  2006-2023
p
A
n
E
F
Song Title by Artist Name