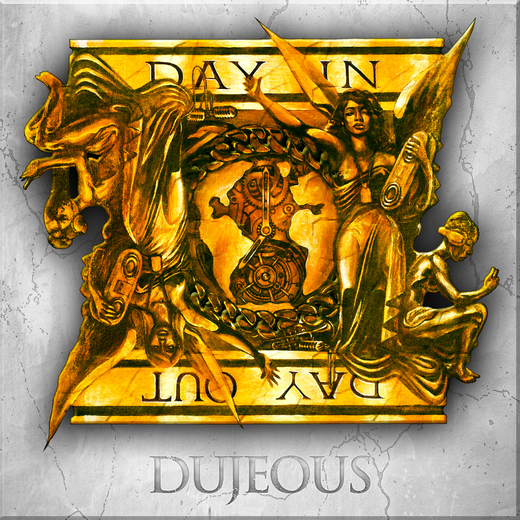 Dujeous (doo-jee-us), acclaimed New York hip-hop band, are gearing up for their sophomore album, Day In Day Out. With buzz building—not to mention cameos from John Legend, Sharon Jones, Immortal Technique and Maya Azucena—the LP is set to take Dujeous to a new echelon when it drops April 3 through Empire/Dujeous LLC.

Friends since pre-K, Dujeous blew up through the NYC underworld while they were still in high school, graduating from talent shows to sold-out clubs, worldwide tours and superstar collaborations. In 2004, they dropped their debut, City Limits, moving nearly 20,000 units via nonstop touring, and followed with mixtapes Game 7 (2007) and No Clearance in (2009), garnering thousands of downloads. Top DJs, including Enuff at NYC’s Hot 97 and Skee at L.A.’s KIIS, gave the Duj key support. Critics jumped on the bandwagon as well, calling Dujeous “groundbreaking” (allhiphop.com) and “a producer's dream” (Time Out NY), while XXL last year named them one of the top five hip-hop bands. The buzz made Dujeous a music supervisor’s fave, with synchs in films such as Half Nelson and Blue Crush and TV shows such as Entourage and Crank Yankers (for which Dujeous produced the theme, featuring Rhymefest). Meanwhile, onstage, the Duj busted out of the boroughs to rock across America, Europe, and Asia, with the likes of Kanye West, Tom Petty, The Roots, Funkadelic and Wale. As word of the band’s skills spread, they snagged some serious collabos, playing onstage and on-wax for Kanye, Mark Ronson, Big K.R.I.T and Amy Winehouse, and producing for Talib Kweli, Dip Set and Jean Grae. Last year, Hot 97’s Peter Rosenberg hit up Dujeous to be the house band for his famed Noisemakers series, where he interviews icons like Q-Tip and Diddy while the Duj plays cover versions of their classics. It’s easy to see why Ronson called Dujeous “NYC’s only hip-hop band worth talking about.”

Now, Dujeous is aiming to up their résumé with the release of their sophomore album Day In Day Out, taking their music and message forward in leaps and bounds. “We expanded and stepped out of the old formulas, both our own and hip-hop’s,” says Mojo, lead vocalist, of the album. “New instruments, new guests, and new topics—we really challenged ourselves musically and lyrically.”

But one thing has remained constant: a goal of redefining what it means to be hip-hop. MC-singers Mojo, Mas D, and Rheturik keep the rhymes to-the-point and provide stellar three-part harmonies. Bassist Apex and guitarist Taylormade, the group’s main producers, create lush backdrops that effortlessly blend melody with boom-bap bounce. Meanwhile, trumpeter Dave Guy, also a member of funk-soul outfits The Dap Kings and Menahan Street Band, brings ethereal jazz textures to the proceeding. Day In Day Out is also stocked with contributions from the Duj’s talented extended circle, including John Legend, rap provocateur Immortal Technique, and funk queen Sharon Jones, who appears on the single and video, “Spectacular,” an inspirational banger punctuated by horn swells and a throbbing backbeat. The video has received heavy airplay on BET’s Centric and Video Music Box.

In advance of the album, Dujeous released a free mixtape in February, Dusk Till Dawn, with appearances from Skyzoo, Smoke DZA and Potluck. Meanwhile, last October, Taylormade and Mojo’s side project, The Next, released “This American Life,” featuring Talib Kweli and Immortal Technique, which became a blog favorite via 2DopeBoyz, Okayplayer and elsewhere. To say that fans’ ears have been primed for the release of Day In Day Out would be an understatement.

With a new-and-improved sound, a new focus, and a new album, Dujeous is ready for new eardrums, new stages, new continents and new levels of success.