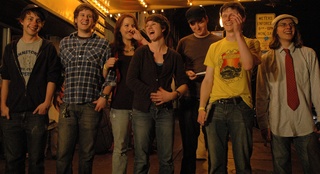 "When I first heard 'You Drew the Line,' I knew Capitol Jay had something special going on." – Brian Tighe (The Owls, The Hang-Ups

"Capitol Jay's premier release with Limerick Records evokes the lush atmosphere of an Iron & Wine arrangement with their languid strings and gentle guitars. Their vocals are wandering and obsessive, young and thoughtful. The result is a testament to the liberated, DIY philosophy of their label."
- Becky Lang (MN Daily

Until now Capitol Jay has never released a full-length album, though the band has existed in some form for nearly ten years. It’s not for lack of material, time, or resources; it’s largely because the band members hold their music up to such a high standard. They’ve always felt that if a song they write is not truly something they would listen to and enjoy as fans, then they have no business performing or recording it as a band. It’s that steadfast commitment to excellence that makes Capitol Jay clearly stand out from the myriad of competition in the Twin Cities music scene

The release of their debut album, Strangers In My House, showcases the band at its most confident and creatively rich period ever. After a tumultuous year filled with line-up changes and musical soul searching, Capitol Jay has finally become the band that they were always meant to be. The group now includes Jason Wiederin (vox, guitar), Cody Westby (bass), Tim DeYoung (drums), Ian Jackson (guitar), Chelsea Anderson (cello), Erin Durkee (violin), and Brian Craddock (keys)

In addition to recording, Capitol Jay has also been busy performing their captivating and expertly crafted live show for sell-out crowds around the Twin Cities. For last year's Friends With Benefits concert at The Varsity Theater, Capitol Jay performed with Brian Tighe (The Owls, The Hang-Ups) who wrote a guitar part for one of their songs that eventually made it onto the finished album. Other recent highlights include opening for Limbeck at The Whole Music Club and for Ben Lee at Augsburg College where Capitol Jay met local indie heroes The Alarmists. The Alarmist's lead singer Eric Lovold was so impressed by the band that he offered to produce Strangers In My House at his own private home studio in Saint Paul. Though the album was finished elewhere due to The Alarmist's busy schedule, Capitol Jay still has a working relationship with Lovold

After the release of the album, the band will tour extensively around the Midwest and beyond – as well as pursue collaborative projects with other local artists and friends. The members of Capitol Jay also volunteer their time with organizations like KFAI Radio, DEMO, and plan to offer all of their music free of charge via Limerick Records.
« View This Artist's Complete Profile
Connect with OurStage: Facebook Twitter YouTube FourSquare Newsletter RSS feed
ADVERTISEMENT
?Need help?
Copyright © Amazing Media Group  2006-2022
p
A
n
E
F
Song Title by Artist Name