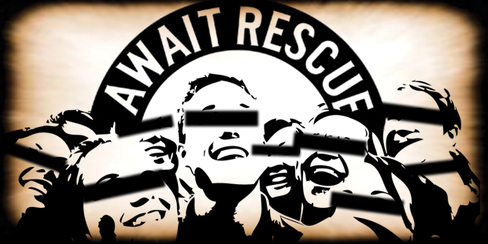 Await Rescue will give you a break from whatever you are listening to.  They aren’t over-produced pop and don’t play into the current retro crazes overtaking music, nor can they stand unable-to-be-stomached modern “Rock” sound that has embarrassed the genre they love so much.  Instead, the sounds on Await Rescue’s “Everyone You Know“ EP can best be described as the stadium-sized hooks and songwriting sensibilities of Foo Fightersmeet the aggression and raw energy of Every Time I Die.

The Boston-based band’s path was chosen back in 2006, and to date, Await Rescue has released four albums, toured the East Coast, sold out shows at The Middle East Nightclub, Bill’s Bar, and The Magic Room, been voted into the Top 5 on the WZLX Boston Emissions’ Chart for four consecutive weeks, and had their songs “Fool My Eyes” and “Clipped Wings” featured in multiple episodes of the TV show “NY Ink.”

Await Rescue is currently supporting “Everyone You Know” (released April 2013), and they could  tell you about all the effort, sweat, late nights/early mornings, beers, facial hair, and moments of almost passing out in an old, spider-infested 100-degree warehouse that went into making Everyone You Know, but the record deserves more than that.  The album’s beginnings were born at the band’s lowest point when they were ensnared in a never-ending bassist search that stretched out over 8 months, and although “Everyone You Know” is the EP’s anthemic title track, “Thanks, But No Thanks” was the song that kept Johnny, Drew, and Matt moving forward even when no bass prospects were the horizon and set the tone for the songs that followed.  “Thanks, But No Thanks” speaks to how the members could have given up on Await Rescue to pursue other musical opportunities but which they declined out of hand for a love of doing what they do together as a unit and the firm belief that no one else is making the aggressive Rock music anymore like the tracks they have crafted and road-tested over the last year.  It was also the first track finalized with bassist Corey Fyfe in tow that galvanized the direction of the rest of the EP: pure, raw, Rock with no agenda except to explode out of the speakers.  With the tone set, producer Brian Packer ratcheted up the “F-you” attitude that permeates the record and helped craft the songs so that each contains a sweet spot that pays off for the listener.  While 5 out of the 6 tracks on the EP attack like a rabid coyote ready to lash out at anything that moves, “All She Needs” charts new territory for Await Rescue as it starts off delicately and slowly ramps up until it lifts off the ground like a 747 taking flight, showcasing an entirely new side of the band in the process.

The aggression and apprehension that built up in the band as they felt they were being passed by and potentially forgotten about is easy to hear in each of the tracks on Everyone You Know because those feelings were palpable as they cut the album live in the same room together.  All four members now feel a pressure to make up for lost time and to prove themselves in the oversaturated and hyper pressurized music scene, and in that spirit,Await Rescue will load up the trailer, make sure it’s locked, and take these songs to any sweaty venue willing to have them.  God bless Rock ‘n’ Roll.