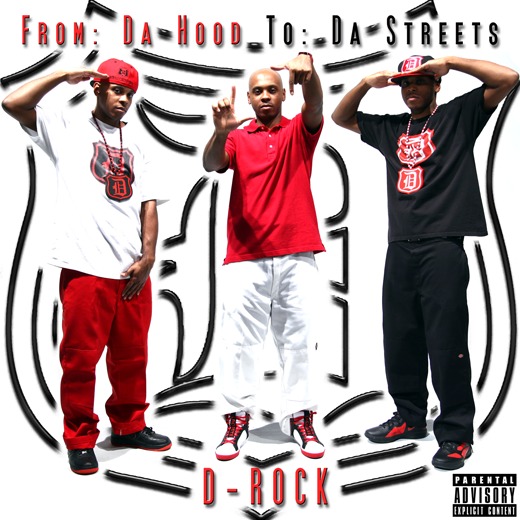 iTunes - Music - From: Da Hood to: Da Streets by D-Rock

D-ROCK is Detroit's finest up-and-coming rap artist. D-ROCK is a lyrical phenom with a background in writing, a degree in journalism, and a love for words which matches his passion for music. D-ROCK has been rapping for about 10 years since his early High School days. After several mixtapes, countless features and other credits, D-ROCK is finally ready to launch his most ambitious project to date.

D-ROCK - From: Da Hood To: Da Streets, the brand new album is essentially his debut which he has spent the past two years crafting to perfection. This project is sure to be labeled a classic album that you can play from top to bottom as a revealing story unfolds detailing what it's like being broke, growing up in the hood -- trying to survive yet thrive -- and ultimately, make it out the ghetto...alive. In a way, the album is a letter to everyone dealing with similar issues of struggling to live in despair while fighting for a better life. From: Da Hood To: Da Streets features 20 amazing songs and 20 of the finest rappers as well as a couple of singers straight out of Motown. Much like D-ROCK, every artist featured has a never-ending grind, an impeccable work ethic, and each knows how to craft big hits.

D-ROCK is a true representative of the city of Detroit -- a blue-collar worker who gives his all, makes no excuses, and refuses to take "No." for an answer:

NO manager? NO problem!

NO label? NO problem!

D-ROCK has never been the type to wait for something to fall in his lap. Instead, he prefers to get up and go get it himself. From: Da Hood To: Da Streets was funded out of his own pockets. Thankfully, producers (all of whom featured on the project have unique, incredible styles) were willing to work with him and give him a break in exchange for hits. D-ROCK has a knack for making big anthems, radio records, and stadium bangers . The only thing missing is a stadium full of fans.

D-ROCK has achieved many accomplishments in recent years as a result of performing and getting his name buzzing all over the world with hit songs like "Yup (U Know It)" , "Spotlight" , "Vibin" , "Bad Girl" , and more. His YouTube channel (drock313rd) is fast-approaching 1 MILLION views. One song, "Leggings" accounts for over 100,000 views alone as well as a freestyle over recording artist Tyga's "Rack City" instrumental with well over 400,000 plays.

D-ROCK -- born in Syracuse, NY -- was raised on the west side of Detroit for the majority of his life since the age of 5. A Detroit player with an east coast flare. D-ROCK is a student of the game who is eager to learn the tricks of the trade. Coming from the school of his favorite emcees (2Pac, The Notorious B.I.G., Jay-Z, Eminem, Lil Wayne, Kanye West, Fabolous, Nas, DMX, & Ice Cube), D-ROCK has borrowed various technical skills in order to graduate to a higher level of advanced story-telling and other lyrical abilities, allowing him to craft his own individual style.