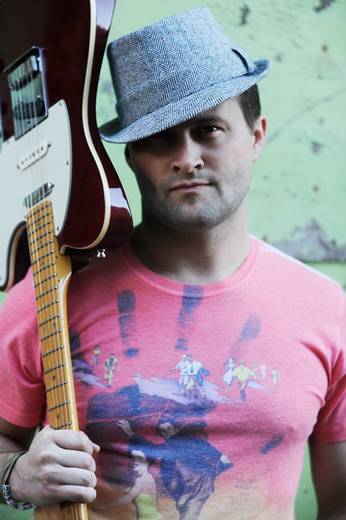 Paul Hadfield comes from Paducah, a small town in western Kentucky at the confluence of the Ohio and Tennessee Rivers - a town of waterways and railways. It is a place of constant motion, of arrivals and departures, where things are so often left behind and taken away, either by water or steel.

It was that constant motion that became the drumbeat of the music Paul has been writing now for a decade, telling stories about Life - everything that we want from it, and all the things it takes away.

In the tradition of songwriters like Bruce Springsteen, John Fogerty, Steve Earle, John Mellencamp, and many others, Paul draws on the best elements of Country, the Blues, Rock 'n' Roll, and Bluegrass to create something that is purely American, with no apologies. He paints a picture for us of our lives through stories that are timeless and hard to forget.

Paul started writing songs around the age of 15.  During his college years, he began to get serious about the craft of songwriting, playing in bands and performing in the Nashville area.  He moved back to Kentucky in his early twenties, and went into artistic retreat.  Over a period of about 5 years, Paul did no live perfomances, choosing to focus exclusively on finding his own voice.

In 2007, Paul emerged with a clear vision of what he wanted to accomplish.  Looking to make a high quality demo, Paul came into contact with Kent Wells, a accomplished musician and rising producer in Nashville.  The demo they made together led to Paul's first live performances in years, playing songwriter gigs in the Western Kentucky area.

Over the next couple of years, Paul continued to pursue his craft, forming a band called Burncard that allowed him to explore a variety of musical influences.  After completing a self-produced demo, Paul and Kent reconnected in 2010 and decided to produce an album that truly reflected the artistic vision Paul had been crafting for close to a decade.

The result of that partnership is Our Lives, released in June, 2011.  The record was recorded at Sound Kitchen studios in Franklin, TN and features an all-star band of Nashville session musicians.

The release of Our Lives and the story behind it is the fuel behind a rapidly accelerating career for Paul Hadfield.  Now living in Chattanooga, Paul has formed a new band and is currently playing the listening rooms in Nashville and the Chattanooga-Atlanta corridor.