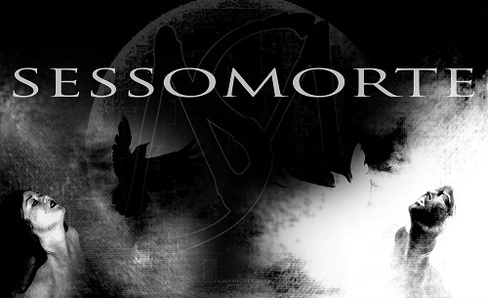 The music of Sessomorte marries Electronica to the stirring vulnerability of live instruments. Their desire is to convey deep emotion from within the abstract, but limitless framework of synth-based orchestration. This was the vision born in the dawning dreams of Sirico's musical infancy, and now continues as an expressive chronicle of authentic personal experience and introspection.

Music of intense passion and sensuality, Sessomorte runs the gamut of moods and textures. The threads of disparate influences are artfully woven into lush aural tapestries. "Liliko's voice is a hot, brilliant flame dancing upon the dark yet melodic soundscapes rendered by Sirico."

Sessomorte began in late 2000 when a musician/ aspiring producer met a world-renowned Olympic athlete/ aspiring vocalist...
Vincent Sirico, a guitarist/bassist (and cousin of Felix Cavaliere of the Rascals) had been playing bass in an original progressive metal band called The Pure. After four frustrating but productive years ('93-'97), it had run its course, leaving him burned-out and jaded from playing the tired NJ/NYC bar circuit.
In 1998 after discovering Acid House, Jungle and Trip-Hop, and acts such as Crystal Method, Massive Attack, Bows and Reprazent, he bought a Roland synth with a MIDI sequencer and began exploring this new medium. What emerged, was trance and ambient-tinged Trip-Hop in the style of Mono, Archive and Portishead, and he set out to find his own female vocalist to catalyze his new material. Then, in a moment of pure serendipity, he found Liliko Ogasawara...
Vin wandered (typically) into a NJ bar, where she happened to be ripping it up on its famed karaoke night. After hearing her perform Fleetwood Mac and Madonna songs, he was blown away by her timbre and talent. Foreseeing great things, he introduced himself and invited her to sing on some songs he was developing. Chemistry was immediate, and the two began writing and recording what would eventually become "Visceral" (2007).
A track from which appears in Cameron Beyl's film, "So Long, Lonesome."
They since have released “Walls” in 2012, and "Into The Grey” in 2013.