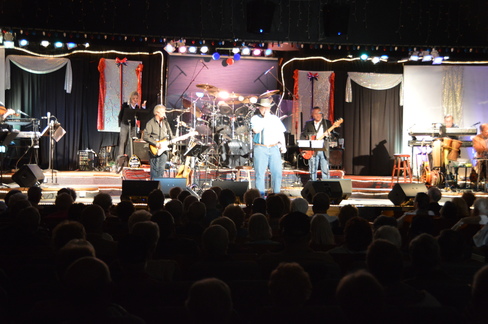 June 14, 1966, Darren Rhodes, born Darren Harold Coleman to Harold and Jane Coleman, screamed his way into the world in Windber, Pennsylvania. Six pounds/seven ounces, with dark hair, dark eyes and lusty (ready to make some music) lungs. He was surrounded by music at an early age, listening to his parent's favorite country records. Every year, he and his sister watched Mom and Dad singing and playing at family reunions. His dad played guitar and his mom played her accordion, singing the old country songs Darren learned to love. Darren seemed to be a natural with music. He was quick to learn lyrics to both old and new country songs. This gift would be an asset as he began to look to music as a career. His dream was to be on the Grand Ole Opry. This dream began to take hold at age seven, after seeing Marty Robbins perform. Darren surprised his parents by playing the Wabash Cannonball on the guitar at age nine, after closely watching the way his dad played the chords. From then on, the guitar became Darren's best friend and companion. Darren's best friend and companion. Darren's formal singing lessons came from school choral groups he joined from sixth grade through twelfth. After moving to Florida with his family in 1982, he auditioned for and was picked to sing in a local Opry show. Wanting to pursue a career in music, he moved to Alabama in 1993 with the Opry show. Later he joined an area band as the lead singer. Their country music and his personal style of singing were well received. He appeared on the Country Boy Eddy Show, a local TV show based in Birmingham, Alabama. He also performed at the Alabama Country Music Association near Cullman, Alabama. In November 1998, Darren recorded a 2 song CD at Chelsea Studio in Nashville, TN. The first song on the CD debuted at ..48 on the Independent Tracker Charts on March 10, 2000. In November 2000, Darren recorded his first album at KMA Records. The album, "Jesse Told Becky Goodbye," was released in February 2001. Darren has performed several times at the VFW in Chattanooga, TN, where his music has been well received. Darren seems to increase his following every place he performs. His first album continues to climb up the Independent charts. On March 18, 2001, Darren performed with Grand Ole Opry Star, Ernie Ashworth, at the Holiday Inn Select in Nashville, TN. This performance was to benefit the Children's Rights Council (CRC). Darren's song, "Jesse Told Becky Goodbye," appeared on a compilation CD along with music by Ernie Ashworth. Sales from the CD go to help the CRC National organization. In April, 2001, Darren released a single to radio stations entitled "Politically Incorrect Redneck." This song has proven to be very popular. An album containing this song will soon be going to press. Fans may purchase it by late summer. Darren performed live in Chattanooga, TN, on May 19, 2001. He and a live band performed for Penske Oil's Customer Appreciation Day in the K-Mart parking lot. Everyone who hears Darren knows he is on his way to seeing his dream come true. If you ask him, Darren will tell you God has given him his talent and remains in the spotlight - center stage - a very important place in Darren's life! Darren Rhodes "Jesse Told Becky Goodbye" has just won International Song of the Year at the International Airplay King Eagle Awards in Nashville, 9th month 2001. Darren Rhodes also receives an award from the Best Of Texas Awards held in Beumont, Texas for (Male Vocalist Of The Year.) 10th month 2001.