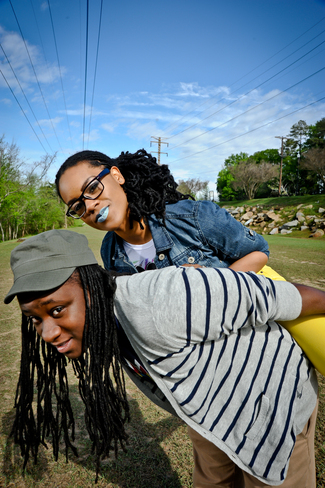 “SideKick - - Rap, Hip Hop, R&B, and Soul with a splash of Pop tossed in a blender and turned on high.”

Comprised of William “BowTye” Dantzler and Nicole “ELLE” Ingram, this dynamic pair is diligently working on their album “Background Check” as their first independent release under their production company, BassLine Music.  As of to date SideKick is most noted for their 2011 nomination for Best Rap Duo in the national 2011 Underground Music Awards.

Born November 16, South Carolina native BowTye, rapper, singer, and songwriter, is also the teams’ exclusive producer.  BowTye was recently invited to iStandard’s Production showcase in Atlanta, GA, in which only an elite five percent of hundreds of submissions were chosen to participate.  He credits super producers such as Kanye West and Ryan Leslie as influential role models in his endeavor.  BowTye’s educational background is Music with an emphasis in Voice, in which he utilizes by also currently serving as a percussion instructor at his former high school.  Adopted as a child, BowTye attributes his music to his discovery of self, and it serving as a vehicle to his vast exploration of life.

The other half of SideKick, ELLE, songstress, femcee, and songwriter, reigns from North Carolina and is a multi-talented artist and an unparalleled female rapper who aspires to make headway in today’s industry of very few.  “Lil Wayne, Kanye, Nicky Minaj, Erykah Badu, and Jill Scott” she says, when asked who is on her IPod playlist.  “They spark the release of my personal creativity”.

Writing songs at the early age of 11, ELLE still however, never received any formal musical training.  After being introduced to BowTye in 2007, their mutual desire to pursue music on a global scale provided ELLE with an opportunity to hone her natural talents under his direction.  ELLE is a confident, unyielding, larger than life personality, while off-stage on the flip side of things, a reserved, much less dominate introvert.  Born on June 11th, she refers to herself as a ‘true’ Gemini.

In a recent one on one music review, SideKick was commended for their many artistic abilities including their vocals and musical concepts, from Multi-Platinum producer and Atlantic Records A&R, Jeff Blue.

So keep your ears open and eyes peeled for extraordinary things from these partners in rhyme!