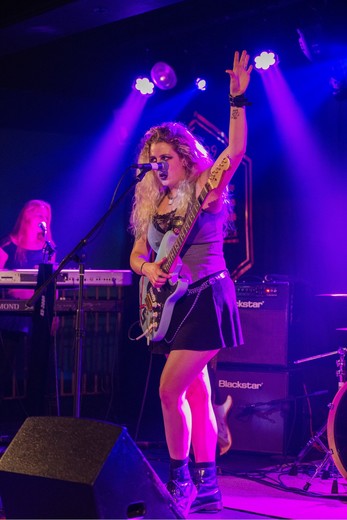 Forged in the heat of an intensive two-hundred-gig-per-year touring schedule that saw her performing across the United States and Continental Europe, Erin Bennett has extensive experience as a musician. Her first band, Syren, formed with acclaimed musicians Amanda Smith-Skinner on bass and Jo Heeley on drums, was filling venues within its first year of touring. Unfortunately, despite their successful touring schedule and an ever-growing following, in 2011 Syren drummer and Erin's wife, Jo was diagnosed with breast cancer, the battle against which took her life in January 2012.
Music was Erin’s hold on life, her passion and driving force. Her already powerful sound took on the distinctive raw veracity that was to become her trademark, cutting right to the listener’s core.
Living in Scotland, she won Songwriter of the Year at the Scottish New Music Awards in 2012. The pain of the past half-decade was transmuted into music which evolved from her pre-debut folk style to electronica-inspired, bass-fueled rock; inimitable and unforgettable.
Erin formed a new band, comprising members of sensational group Rockbitch who made headlines across the UK and Europe, as well as head-hunted local talent. This spectacular lineup will launch her 2017 album 'Post Sexy, Post Truth'.
Compelling riffs, an unforgettable stage show and soaring vocals define Erin Bennett’s live performances. Expertly crafted rock numbers underwritten by organ and seductive harmonies from Erin's backing singers bring animation to her compositions. Erin has built The EB Band with experienced musicians who share both her virtuosity and passion for performance.