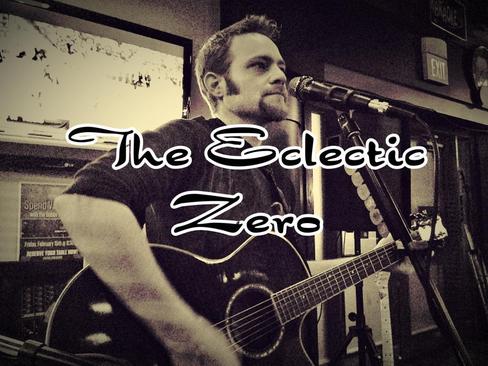 The Eclectic Zero...hmmm what to say. Well, I've been singing and playing music, and writing songs, and running sound for about 25 years total now. I have fronted (and backed) numerous bands and have opened the stage for the likes of Drowning Pool. I pulled rank on the ex drummer of Nickelback once...cause he was being a selfish punk on my stage. ..I don't play that crap. I wanna be a rockstar, but I can't stand "Rockstars" I've done live sound engineering for Vendetta Red, Black Stone Cherry (numerous times), and many others.

My main instrument is my voice, followed by the guitar, bass, percussion, keyboard/piano. I might still remember how to play the clarinet and saxophone just a little. I was mistaken for the lead singer of Three Doors Down whilst standing outside their tour bus behind Rupp Arena September 12, 2001. That's right...that day. She thanked me for "my" band's heart-warming patriotic display...I didn't have the heart to convince her I was not, in fact, who she thought I was...so I grinned and thanked her for her kind words. That's about as close I'e come to fame and fortune so far, and hey, that was years ago...I think she may have been slightly innebriated at the time...slightly...ha!

To me music is about balance and release. It's about many things which operate independently coming together as one, provoking an emotion, a catharsis, an epiphone, or making you need to move simply because you can feel the energy of the universe vibrating through your soul when those particular tones and phrases are struck in just that one way that speaks specifically to you. Sometimes because you need it to, sometimes because you can't stop it.

Feeling music in this way is a vulnerable state of mind. I believe it is one of the few ways in which a widely diverse body of people can open their minds to each other and understand one another. To me music is among the most mutable art forms in the sense that it can and will be naturally applied to fit one's own emotional state or situation at the time.

So I guess you could say that I feel I have something worthwhile to say, and music is the most effective tool. It is however, much more than that, as I feel a compelling need deep within my soul to write and play music. It is what gets me through the hard times, helps me recall the good, and what I believe that I was put upon this earth to do....although I'm not above playing for the crickets either.

I play whatever comes out my fingers, and sing whatever I'm thinking about when I write...I consider myself a modern day philosopher..but I believe in this day philosophy tends to be something people subscribe to, rather than do. I would like to change that. Free thought is of utmost importance to me. I believe each person has a right to determine their own path, so long as it doesn't do damage to an others right to do the same.

I love all styles of music...except jazz...I hate jazz. I mean I don't hate when you listen to it, but I don't like listening to it myself...it's like a musical run-on sentence to me. So other than jazz, I'm apt to sit down and write almost any other kind of song. They may not all be my forte, but they all reflect different aspects of my own internal and external conflict...vis a vie, me.

Truthfully, I hope people enjoy what I do, but first and foremost this project is the story of my life, and therefore, I love it...I require it.

Everything you will hear in my songs is performed and recorded by me in my meager home studio...thank you for listening.