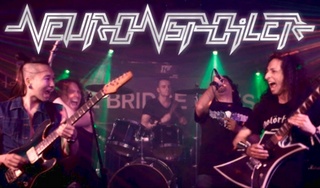 Neuronspoiler's five members come from five different countries across three continents. From their very different backgrounds, each was drawn to London as the place to find their way in music. Now guitarists, David del Cid and Stanley 龍; bassist, Heray Rios; drummer, Tim Barclay; and singer, JR are ready to ignite the British rock and metal scene with their unstoppable musical fire.

The band's sound combines the fist-pumping strength of heavy metal, the taste and feel of classic rock and the headbanging precision of thrash. Their brand of no-rules heavy metal finds the perfect balance between the traditional and the modern.

Their debut EP, No One's Safe, produced by Misha Nikolic (Mike Terrana, John West), was released in November 2010. It received incredibly positive reactions from fans and critics, with Malcolm Dome of Classic Rock Magazine tipping it as one of six self-released records that could have “transformed your lives… within 12 months.”

However, Neuronspoiler's greatest strengths become apparent on the live stage where they unleash an exciting, frenetic and unforgettable performance every time. Since forming in 2009, they have played to and converted many British crowds and now they have their sites set on Europe.

Neuronspoiler don’t care about trying to be faster, heavier, sicker or drunker than anyone else. Passion for music is their driving force, and their aim is to excite that love in all who hear them.
« View This Artist's Complete Profile
Connect with OurStage: Facebook Twitter YouTube FourSquare Newsletter RSS feed
ADVERTISEMENT
?Need help?
Copyright © Amazing Media Group  2006-2023
p
A
n
E
F
Song Title by Artist Name