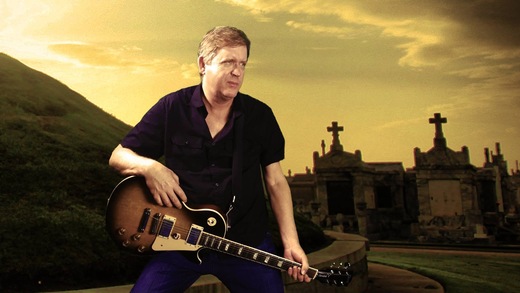 My name is Eric Newman.  I use a pseudonym of Big Easy E because I am fromNew Orleans.  If you are fromNew Orleansthis is something that you are proud of.  It defines you the rest of your life. New Orleansis a place where a lot of cultures are blended together.  The music is diverse there.  I grew up listening to everything and as a songwriter, I can’t write just one style of music.  Like theMississippi riverback in Mark Twain’s day, I change my course going where the current takes me.  It is all soul music to me - rock, blues, country, folk, funk, soul, reggae, mambo.

I grew up on the West Bank on the other side of the river from theNew Orleansthat most people know.  This area is calledAlgierswhich is where Sal Paradise visited the William Burroughs character in On the Road.  Jack Kerouac and the beats had an influence when I began songwriting.  My earliest songs tried to capture that beat attitude.

As a teenager in the ‘burbs, I grew up a rock and roll fan.  At the same time, I saw the Meters and Professor Longhair in small clubs. I experienced the diverse rhythms of the city from the Mardi Gras parades with the bands big bass drums beating into your soul and all the great jazz and funk clubs that were around.

But it was the guitar that moved me the most and I discovered that my real love was blues guitar.  I had to learn to play blues guitar. My first year of college, I was at Ole Miss with long hair where I got the nickname “Spaceman”.  I guess I was a little different.  I spent my Fridays learning all about the blues in the campus library.  Every Friday I would walk into the Mississippi Collection which was one half Faulker and on half devoted to the blues.  There would be these little old ladies in the Faulkner side that I would say hi to and then immerse myself in the blues section.  I learned to play guitar from that and Bob Dylan songbooks.  That was when I started teaching myself to play by ear. I just played along with records until it started to sound like something.  I made the blues scales I learned fit what I listened to and most times it worked.

Even though I grew up in New Orleans, I was always kind of the outsider since I was an only child and my parents and most of my aunts, uncles, cousins lived in north Louisianawhich was country country.  So I guess I had some redneck in my blood too. I would always play and sing with my mother and learned some classic country through her.  I started writing country songs because you could be honest and real in that genre.

At the same time I have a world view musically from living inParisand having a Brazilian wife.  I used to live inMontmartrenear the Place des Tertre where there was always some gypsy jazz playing.  I am influenced by old school Latin rhythms and reggae too.

My songs can be about anything.  I am a film noir fan and sometimes I get into that frame of mind and try to create a little film noir movie.  Sometimes it’s a feeling, a phrase, a place, a groove.  A lot of my songs seem to be about losers.  The winners don’t need the empathy.  Losers are more interesting.  But everyone has loss.  It is what is gained from that which is important.