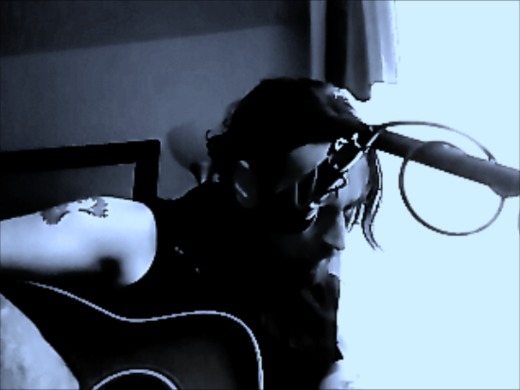 Blackbirdblue (Cameron Mackay) is a unique Singer/Songwriter from the east coast of Canada that is gaining attention from around the world. His voice and lyrics combined with a faithful guitar muse creates a environment that evokes strong feelings and emotions as he takes you on a journey of love, loss, regrets, and redemption. Starting life with tragedy and hardship Cameron discovered a love for singing at an early age, a way of escaping from the world around him and connecting with something deeper inside himself.

From Industrial/experimental music in his early days to the stripped down acoustic style he now prefers Cameron has always had a depth to his music that just gave you the feeling that this guy was the real deal! A songwriter with great passion that was keeping himself on the sidelines for what ever reasons he had at the time. Aside from music Cameron over his life has worked as a Blacksmith,props maker,bike mechanic, and Brew-master just to name a few...." I like to do things until I feel that there is nothing left for me to learn from them. Once I reach that level it's time to move on to something different,new, and challenging. That's what I love about music, it can never truly be mastered; not in one life time anyway!" Cameron is currently working on his first full length album "Out of the night"

The stage name Blackbirdblue is in honor of his mother (Josephine Cameron) who died in the Bluebird cafe fire of 1972 in Montreal, Qc.
She was performing at the time