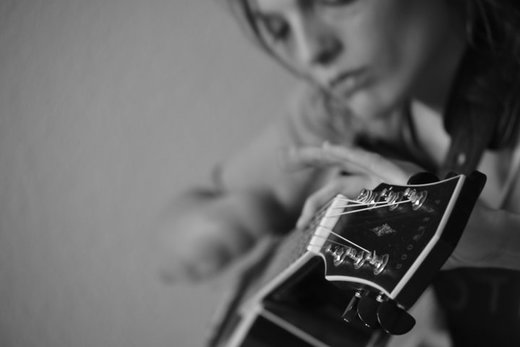 Chuss Laforet is a composer and Spanish guitarist. She is born in Santiago de Compostela, although she moves to Madrid when she is 7 years old. At this age she starts taking classical guitar lessons. At 14 she buys her first acoustic guitar, an instrument that she starts discovering and exploring on her own. It’s at this time that she starts her carer as a composer. She grows up surrounded by all kinds of musical forms and influences. Most of her songs are written with alternate tunings. Her technique is similar to that of Michael Hedges, Eric Roche or Preston Reed. She cites these guitarists as her greatest influences, together with Vicente Amigo, Tuck Andress, Path Metheny or Vicki Genfan. In 2011 Chuss’s first album, ‘Stop Motion’ is released. It is a record of contemporary instrumental music, entirely performed with an acoustic guitar. A precise rhythm and the subtle treatment of silences sustain each song, rousing an intriguing sense of weightlessness. Thus, an emotional, organic and sincere style emerges. The sound universe of Chuss Laforet immerses you in a landscape of compositions in which the technique is put to the service of the song’s content. Thanks to this performing ability, her music goes beyond the score to also transmits the sensitivity of a great story.