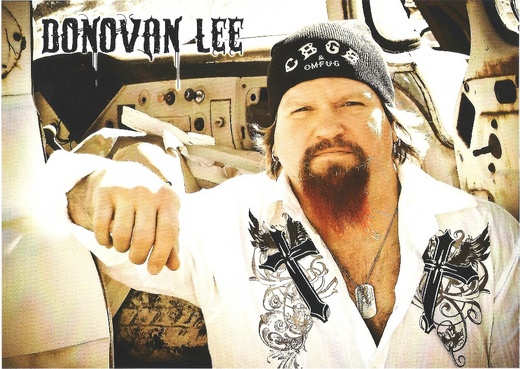 Donovan was born in Port Arthur, TX and started playing music at the age of 12. When he turned 19 he left the music scene to pursue a career to support his family. Then, at the age of 27, he joined the United States Marine Corp. This is where he rediscovered his love for music. While stationed in San Diego, CA, Donovan started singing again on a karaoke dare. But, it wasn’t until his deployment to Iraq that he realized the true impact and healing of music. Donovan bought an acoustic guitar in Ar Ramadi and started playing and writing songs during his downtime on base. After about a week Donovan noticed he had created an audience of 20 plus Marines, it soon became a daily event and the audience continued to grow. While in Iraq, Donovan suffered a hand injury and had to have bone fusion surgery upon returning home. In 2009 after spending his last 3 years on medical/reserve status the United States Marine Corp discharged Donovan with 8 years of Honorable Service.

In 2006, Donovan went to New York City and attended Digidesigns School at Soundtrack Studios and became a Certified Digidesigns Pro Tools Operator. Then, in 2007 he opened Dungeon Recording and Sound Studio in Westcliffe, CO. Donovan has recorded multiple local artists and helped them succeed in their own musical ambitions. Donovan decided to continue his own passion for music and started playing drums for a local country band. Donovan had the opportunity to perform as an opening act with Josh Gracin. In October of 2009 Donovan created his own Band, Taylors Bayou. Taylors Bayou began an 8 state tour and has played over 600 shows and festivals to include: Nebraskaland Days, The Hershey Fall Fest, The Canon City Music and Blossom Festival, The Archuleta County Fair and Copper Country at Copper Mountain. Donovan has shared the stage with artists to include; Darius Rucker, Glorianna, Theory of a Deadman and Whiskey Myers. Throughout 2011 Taylors Bayou “band” began a transformation to Donovan Lee “artist”. With a debut album release named “Taylors Bayou”.

Donovan’s originals have been played on 40 plus Radio Stations in Nebraska, Colorado, Kansas, Texas, Tennessee and has had his music played on several TV Shows throughout Europe.  Donovan still travels and plays shows with his band Taylors Bayou, but he plays and pursues his own Solo ambitions as well. To include performances at numerous venues in Downtown Nashville’s Legendary Broadway Music District. Donovan is attending the Berkley School of Music and working on a Master Certificate in Guitar and Vocal. Donovan is continuing his education in pursuit of a Bachelor’s Degree in Music.

Donovan has played acoustically on Live Broadcast with the following radio stations.

Some of Donovan’s accomplishments include:

Finalist for a Pilot Show called - The Long Road to Nashville

Certificates of Completion from Digidesign:

Reason in the Real World