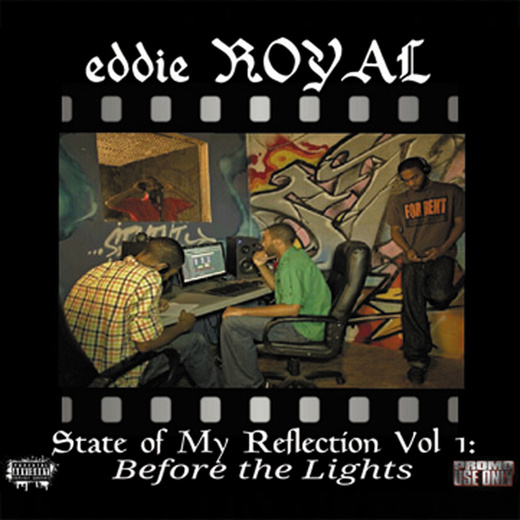 Philadelphia-bred, Hip-Hop wunderkind, Eddie Royal's music is inarguably some of the most realistic and exciting things going on in the underground hip-hop scene right now. Considering himself a protégé of the game Eddie had to dig back into the roots of Hip Hop because he really didn’t start his musical endeavors until about 1997-2000. Using uncanny wit, undeniable skills and the natural gift of having a way with words Eddie is looking to become one of the most successful artists to ever embrace this culture.

He has helped put together a consistent array of city slamming, internet buzzing mixtapes with the HR Vol Series (HR Vol 1: Makin’ Moves, HR Vol 2: Beginning of the End & HR Vol 3: I Rise) and has his own solo mixtape which is his first solo release. State of My Reflection Vol 1: BEFORE THE LIGHTS, Eddie Royal’s mixtape, is a direct insight to ER’s mindset and what influences him to write his lyrics. Thinking that true Hip Hop is something that is lost Eddie is attempting to do what a lot of artists aren't. BRING BACK HIP HOP ON A WORLD WIDE SCALE. Anyone can rap but few can be lyrical and effective in those lyrics. Few people can grasp you and pull you into their world with untamed conceptual thoughts and real life lessons that bleed through the pen. That's where Eddie Royal excels.

He was born Eddie Jefferson III in Philadelphia, PA spending the better part of his barren childhood bouncing back and forth between his hometown and the city of Camden. Initially attracted to various lyrical based outlets as a teenager, Eddie began writing R&B lyrics for various friends who were singing and recording their own music. As the lack of the ability to hold a note started weighing on Eddie’s heart he decided to try developing a style of his of where he could express himself through the same lyrics he would write for other artists. Hip Hop seemed the best fit for the mindset the Eddie presents and expresses himself through. Join him on his journey.