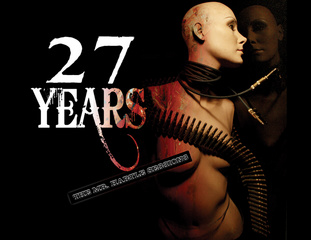 27 Years is a dynamic rock group based out of Minnesota. The combination of innovative songwriting, explosive musicianship and a powerful live show sets 27 Years apart from today's typical rock scene. The current lineup features Lantz H. Dale on Guitar and Vocals, Conrad Wachter on Cello and Keys, Wes Bollingmo on Bass and Sam Nilson on Drums. The band name, 27 Years, is a testament to the great musical heroes of the past who left this world far too early. 27 Years may be named after their fallen idols but even Jim Morrison once said, "Each generation wants new symbols, new people, new names. They want to divorce themselves from their predecessors." 27 Years hopes to be and do just that.

The Mr. Hartle Sessions Album Review by Mike DeGagne
The story behind the album is intriguing. The concept as a whole is all encompassing. The music is brash, innovative, and well played. This time out, Minnesota’s 27 Years decided to try their hands...
p
A
n
E
F
Song Title by Artist Name