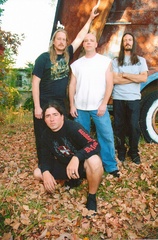 It was the Spring of 2004 and a band of seasoned musicians were searching for a new singer and a new identity. While jamming in the garage, the band began working on molding and shaping what would later become a band of brothers. Upon firing their singer, the call went out for a new frontman with fire, grace, and the balls to lead a "new" band out of the ashes of its former self. After many auditions that man would be Michael Gillis. Michael, along with Jeremy Acito (guitar), David Leach (drums), and Dave Russell (bass), would bring to life a band called "8 Red Eyes". One week later the rehearsals began and the first original song was born. That opened the flood gates of creativity. Within a month there was approximately eight new songs and a strong sense of urgency to hit the studio and begin recording a five song self-titled demo.
In the summer of 2004, 8 Red Eyes invaded Lakeridge Studios to begin laying tracks for their first EP. From the very first note, excitement poured out of each member knowing they were one step closer toward their intended goal, getting our music out to the masses. Through broken guitar strings, all night sessions of guitar leads, and a few busted drum heads, those long sessions in the practice hall were about to pay off. After the recording process was over it was on to Bristol, Tennessee where the final mix and mastering would take place. It was there that 8 Red Eyes found the sound and later the home for their first full length studio release with the help of Mike Stephenson and Gene Hughes at Sonic Design Studios. Later on that summer, the debut EP would be released and the band would hit the road playing shows and building a large following. They opened shows for many bands until they had developed a large enough set to carry the weight of a three hour show themselves.
The summer of 2006 was a very dark time for the band. Dave Russell left the band to pursue a different musical direction. David Leach then left the band later on due to personal reasons. This left Michael and Jeremy to find a new bassist and drummer to continue playing and writing. However, they found that they were not happy with the line-up that they currently had. This line-up caused grief and alot of strife inside the band among all the members, new and original.
A year had passed, and with the band not rolling in the original direction that brought them all together in the first place, Michael and Jeremy found themselves talking about putting the original line-up back together. During the course of time, every original member had stayed in contact with each other. Why not? They were family regardless of the situation!!
The fall of 2007 brought all four of the original members back to the practice room with a new understanding and a bond that they did not have with the replacement musicians. The love of making and performing music, not for their own selfish needs, is what it is all about. The desire to bring their energy and passion back to the fans. Because, if not for the fans and their love, 8 Red Eyes would have met a fatal end.
It is now 2008 and 8 Red Eyes are back and ready to lay claim to their rightful place among the premiere rock bands of the Tri-Cities. They have released a new album in late August called "Discombobulated". Since regrouping, the band has played many shows!! Don't let it be said that fate doesn't play a role in your life. It does!! It brought back together a band of brothers with one common goal and that goal is bringing original, "IN YOUR FACE, KICK ASS MUSIC" with a few twisted cover tunes, our style, to the masses!! So join us when we say: "Spread the Red!!"