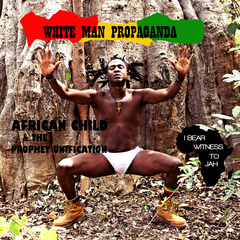 African Child born in Bélé, north of Ivory Coast August 3, 1983! When his mama was pregnant, his grandmamma come and tell her that this child is going to be a public person, I call him or her Farafina Ding that means African Child. When he was born his parent’s give him the name Adama Diarra, Adama means the first and Diarra means lion. He left his parents when he was eight years old trying to find some work so he could support his family because of hard living. Travel from village to village town to town country to country over the years. African Child travel to Mali got his first guitar, struggling in the street playing the guitar wherever he goes. He started to work as a stage boy with a band called Tara’s band that played different music styles. He continues to Senegal and Gambia. In Gambia, African Child struggle to make a coffee shop to survive, entertain his customers singing and playing and always delivering peace and love message to the people. He started to work with a band called Afro Star as a stage boy and later on he become the guitarist and the bandleader. Over the time he was growing in the music and the suffering, frustration and the extreme poverty. The political manipulation and all those millions of people suffering and few people decide over other people’s life and with political brutality, violence and aggression and even tribal discrimination within people and people. African Child put his hard life into inspiration with a strong message of unity as a peacemaking force against brutality, violence and political domination. A strong nation and a free nation can only base itself upon education Leadership does not mean domination. The world is always well supplied with people who wish to rule and dominate others. He travelled to Sweden year 2000 and the vision of forming his band finally become reality, The Prophet Unification formed year 2002.