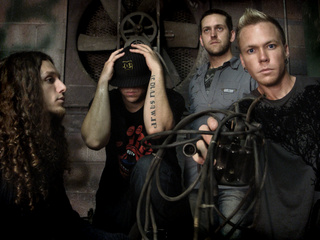 agent jane is a Progressive Alt-Rock band from Memphis, TN. agent jane seamlessly blends dark edgy soundscapes along with intense lucid melodies to fuse an emotional balance between good and evil. Soaring vocals that mutate into distorted whispers overlay a backdrop of dynamic and artistic instrumentation. Odd metered percussion rhythms mesh with pulsing heavy syncopated bass lines to create a collage of textures in which the towering industrial guitars layer into. Together these elements stir feelings of energy and movement that give birth to a modern sound with soul-piercing attitude. agent jane's sound evolved from a fusion of alternative rock and progressive metal. Being more artistic than trendy, it is difficult to put agent jane's diverse sound in a neat little box. The music reaches deep down into a gloomy underworld and explodes into blinding light; reminiscent of The Cure's ability to be both ugly and beautiful. Old-school Black Sabbath riffs and hallowing vocals merged with strong new-school songwriting evoke feelings of a heavy Radiohead. Hallucinogenic jazz-like time signatures weave into dominant grooves to create an atmosphere of vulnerability and uncertainness. Songs will flow from a soft Jeff Buckley touch to an Alice in Chains-like ferocity. The arrangement of each song is completely unique and will take listeners on a journey of vivid emotions.

agent jane breaks Hard Rock Cafe record by Hard Rock Cafe - Memphis
agent jane broke and currently holds the record for the most pre-sale tickets in the History of Hard Rock Cafe on Beale Street in Memphis, TN.
agent jane releases debut album "Feeler" by agent jane
agent jane released their high definition debut album "Feeler" April 3rd, 2009. They released the single "Wasted" and it is getting regular rotation on 93x in Memphis along with "Hollow". You can...
KHTS interview by KHTS
agent jane performs an interview live on KHTS in Los Angeles California on the Brandon Gibson morning show.
93x Band of the week by 93x
agent jane was nominated the 93x band of the week.
Top 10 finish on Ourstage.com by Our Stage
The Night" finished in the Top 10 at #4 in the modern rock category for May 2009.
agent jane chosen for Microsoft Advertisement by Microsoft
agent jane was selected into a Microsoft ad campaign. You can view and download "The Night" for free.
agent jane gets regular rotation in Los Angeles by KHTS 1220 - LA
Memphis, TN rock band agent jane is on regular rotation on KHTS in Los Angeles California.
agent jane perfroms LIVE on TV by WREG
agent jane performed "The Night" and "Reflection" LIVE on WREG Channel 3 on the show "Live at 9".. There were 54,000 people watching live. They also did an interview session.
p
A
n
E
F
Song Title by Artist Name