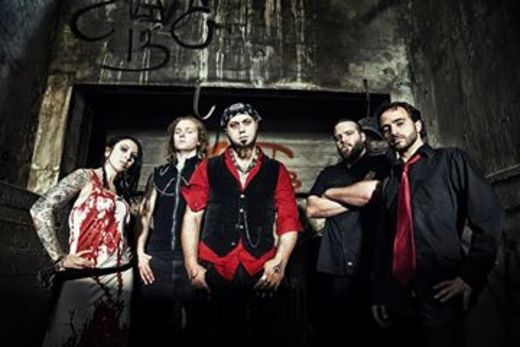 Hailing from Buffalo NY, Pollock is an ambient metal/hard rock band with intense rhythms and unique time signatures. The vocals consisting of elements from poetry, the occult, and mythology make a blend of melodies that envelope the listener. Their music is accompanied by their performance which is used to represent the idea of bringing an art form to life.

Pollock joined the Buffalo music scene in July, 2005. Since then, the band has procured a faithful fan base, toured the Northeast, and released multiple albums. The band hit the Buffalo music scene hard with the Valentine EP (released in October 2010) and spent the following two years opening for national acts and touring regionally. In the late spring of 2012, the band released a follow up EP, La Fin Du Monde, which landed them a first place award in the loud rock/metal category of WBNY’s Western NY Music Awards. On January 19th of this year, Pollock released their much anticipated 12 track LP, “The Moonlight Show”. Awash in a sea of cerebral percussion and emotional swells, Pollock continues to bring the heavy and huge sound that has become the band's trademark. The ever changing mood of the songs is enhanced by layers of strings and percussion; a unique sound that is simultaneously dark, uplifting, heavy, and like a dream.

Check out Pollock's page on facebook at https://www.facebook.com/pollockmusic for more!

"Hot new release from Pollock" by Cyrus Rhodes
Buffalo based 4 piece band Pollock just released their latest effort The Moonlight Show (2013). Band members include Joshua Klein - guitar/vocals / Brian Platter- guitar / Lindsay Leyland- Bass /...
"Valentine By Pollock" by Michael Mallory
About the Artist This is one 4 piece band from Buffalo, NY that brings to the table effective songwriting with a high-energy prog-driven delivery. This is Pollock’s latest release entitled “...
Pollock, Valentine by Kevin Huber
Over the years we’ve seen rock & hard rock slowly erode into over-commercialized, corporate puppet shows providing music that is extremely sing songy, predictable, popish & highly...
Pollock-"Valentine" by Markus Druery
The Artist I recently checked out the latest CD from New York 4 piece Pollock entitled Valentine. The band The playing abilities of this band is pretty solid across the board. I would say they...
"Valentine by "Pollock" by Michael Morrison
This is Pollocks latest release entitled Valentine released in 2010 & it certainly doesnt disappoint. This is one band from Buffalo, NY that brings to the table effective songwriting with a...
"Moonlight Show" LP by Pollock by Cyrus Rhodes
“The latest EP by Pollock is an impressive musical production from start to finish. The music is clean but heavy, & goes down smooth, with passionate messages that are sung from a deeply honest...
p
A
n
E
F
Song Title by Artist Name