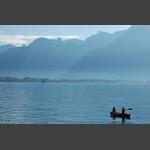 I spared a few moments to interview myself: What is your main involvement with music?
I'm a songwriter rather than a band. But I can produce finished multi-instrumental arrangements.
Why this name?
I thought of having a Surrealist name like Guilt Lily©, Jelly Henge© or Manbird of Zartacla© but it's a long time since Led Zeppelin (oh, they're reforming!) and when everyone has a weird name there is a loss of impact. Alphasun is an anagram of my name. Sandymount is where my family home is located, so I use Sandymount Songs as a general label for the music. Sandymount is a former village, now a seaside district in Dublin, Ireland.

Do you play live?
Rarely. I enjoy it, but I'm hoping others will listen to my recordings, perform my songs or use some of my instrumental music in film or TV productions.

How, do you think, does the internet (or mp3) change the music industry?
It's a big subject, and there are still more questions than answers, but obviously it's largely about scale -- more music and a bigger audience for it than ever before. In the world of vinyl, CD and tape, you wouldn't be reading this or able to hear my music, so the web offers the chance to do a sort of electronic busking on a city with millions of streets (and nearly as many musicians!). As for MP3s, they and the players seem to have improved a lot. I expect it will soon be common to sell them as performances, with video attached. (written a few years ago, now true!)
I suspect that promotion will win the day as it usually ends up doing.
OurStage adds a feature that has been needed for a long time -- the chance for listeners to influence taste by rating tracks in an enjoyable, flexible process.

Would you sign a record contract with a major label?
Probably. It's unlikely, and maybe sites like this represent the new way of reaching the public anyway, apart from live performance. Labels had a key role in the heyday of vinyl and even CDs, but already now the word 'label' can mean a purely electronic operation, and with mobile listening well established, I think people are already beginning to regard the web as their main source of new music. I'm referring to the mass market, not niche labels associated with the cult of small editions of vinyl singles etc., but of course in the Internet era these too could theoretically represent big numbers.
The economics of the online media world are interesting (to me -- skip this paragraph if you find it boring). In the past, publishers and entertainment majors were not only experts but largely controlled the production facilities for sheet music, records and films -- now basic production is much more accessible and there's already an active electronic subculture with (I suspect!) minimal average sales per artist involved, so in my view corporations and existing names will rely even more on promotion to make their products visible and profitable. Hence the continued importance of touring and performance, which is good promotion, oils the industry wheels and offers a unique experience at a serious price.
Judging from the number of electronic publishers that have sprung up, I expect there is some revenue in the new kind of subscription, i.e. instead of subscribing to a monthly or weekly magazine to read about other artists, active musicians can now pay a very modest sum or even nothing to self publish. The revenue for many music sites then lies (apparently) in fees for promotion services and competitions. In fact, I remember receiving 100 sterling just to sign up with one of the pioneer music sites, presumably to enable them to populate instantly. They are still going, with a mixture of free stuff and promotion of known names, so there is a viable model in there somewhere, but never has there been a greater need for a USP. What makes conventional assumptions a bit unreliable when speculating about e-business is the huge numbers involved.
Your influences?
Anything that is good music, not noise, from Greensleeves to Djavan. Classical, Jazz etc. I prefer melodic/chromatic music to modal.
Thanks for your time and for these incisive thoughts.
No problem. You're not a bad interviewer either. And thanks to our readers out there who are still with us.