The Adobe Flash Player is required to watch videos on this page
Print Andrew's Ave.'s EPK 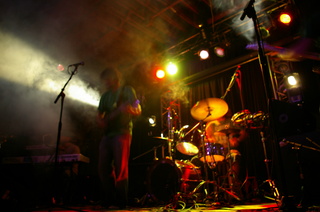 Andrew’s Ave was formed in the summer of ’07 with the mind set of creating music that invokes dancing, subtle spiritual awakenings and breaking down barriers of a somewhat watered down music scene. Their album “Reinventing Vintage”, was recorded in May of 07' at Drake University and was followed by a vigorous summer touring schedule throughout the Midwest. It’s hard to pin a genre on this band but some would argue it blends together jazz, jam, and prog-rock all in a wonderful musical fondue. They describe their sound as “screeching automobiles crashing into innocent bystanders with a side of funk”, but listeners and fans say otherwise: “Each song is completely different from the other, beautiful textures and symphonic bliss” – quoted from an imaginary fan. Love to play, Love to jam.

Backstage With Andrew's Ave. by Daily Nebraskan
Editor's Note: Andrew's Ave formed in the summer of '07 and consists of Aaron Elliot (vocals, bass), Steve Patton (vocals, keys), Adam Boomer (vocals, guitar) and Jason Elliot (vocals, drums)....
And the Winner Is... Waka Winter Classic Hits Linc by Breakfast on Tour
The Lincoln, NE Waka Winter Classic was on 1-24-08 at Knickerbockers. Although one of the bands did not show, the event was still a great success. It featured three great local acts all for the...
p
A
n
E
F
Song Title by Artist Name