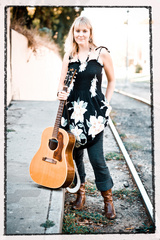 Anna Laube's pan-genre (folk/country/blues/Americana) pop cross over is, in the words of one her critics, "Acoustic, atmospheric, wide open, and western. Dirt covered highways and the setting sun" (CDReviews.com). It's simple and relaxed, derived as much from the American folk-troubadour tradition as it is from newcomers like Ani Difranco and Cat Power.

Born in Iowa City, IA, a place replete with roots musicians, Anna began taking piano lessons at age three, and later studied some boogie woogie licks with David Zollo (Greg Brown, Bo Ramsey, Todd Snider). She took up saxophone, oboe and violin in secondary school, and after moving to Madison, WI, picked up the guitar at 14 after hearing a rendition of The Indigo Girls' song, "Ghost."

Like a rolling stone...Anna continued to develop as a songwriter and headed to sunny California. Her debut album, "Outta My Head," is self-produced, recorded in Bay Area living rooms and in the studio with Birger Olsen of Town Rill, Nick Moran, and Jason Quever of The Papercuts. Engineered, mixed and mastered by Mark Whitcomb and Jason Quever, the album has received both national and international airplay. Currently available directly from her record label, Gingko Records, at Google Checkout, or on Itunes, Cdbaby, or Amazon, "Outta My Head" is a great introduction to Anna Laube's unique voice.

CDReviews.com by by Jake Nuckolls
Think: Emmylou Harris meeting Aimee Mann and becoming one person (an altogether too forced Disney-ish romp that somehow works). Acoustic, atmospheric, wide open, and western. Dirt covered highways...
New Times SLO (San Luis Obispo, CA) by By Glen Starkey
San Francisco-based folky singer-songwriter Anna Laube sounds like a glass of lemonade on the back porch of a Southern plantation. If you like Emmylou Harris or an emotionally lighter Lucinda...
Editor's Review C|NET Download.com by C|NET Download.com
Country, folk, and torchy pop gather like old friends in this San Francisco songstress's burnished tunes. Centered on softly insistent vocals (somewhere between Aimee's and Emmylou's), Laube's...
NPR by NPR
Described as "a name you'll want to remember" by the San Francisco Bay Guardian, Anna Laube makes intimate, heartfelt songs rooted in traditional Americana. With a strong voice reminiscent of Neko...
San Francisco Bay Guardian - Laube & The Love Show by San Francisco Bay Guardian
Sure, it's mighty fine to have that warm, tingly feeling rippling up and down your spine as you discover your newest favorite song by an artist to whom you would hand over the keys to your heart,...
Escape from MySpace #11: Anna Laube by Here Comes The Flood
San Francisco singer Anna Laube can be described is just one word: tender. If you like mellow folk songs, this is a singer you want to check out. She released an album in 2006, Outta My Head, and...
The Onion - Madison, WI by Scott Gordon
Former Madisonian Anna Laube returns from California to release her new album Pool All The Love * Pool All The Knowledge, which follows up the pleasant, intimate singer-songwriter tunes from 2006's...