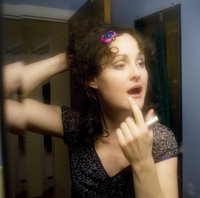 Anne began her musical journey as a child learning to play classical piano. While in college at the University of Notre Dame, she studied Philosophy and Theology. There she sang in a rock band, but did not begin writing songs until after graduation and a move to New York City. In New York, she started going to open mikes and joined a Harlem gospel choir. “I learned a lot of great old spirituals in this choir, such as ‘Motherless Child' among others. John Motley, the choir director, and Cooleridge Taylor-Perkinson, an arranger and composer for the group, introduced me to a lot of early American music. I ended up being invited to tour in Europe as a vocalist with Jazz drummer Max Roach performing gospel, jazz and some of his original compositions.”

“My biggest songwriting heroes, however, were always Peter Gabriel and Tori Amos. The most pivotal moment in music for me was hearing Peter Gabriel’s ‘Us’ for the first time. I think this is when I decided I wanted to make music and write songs. I thought if I could ever touch someone else musically the way Peter did on this record or the way Tori had reached me in so many of her songs, I would have done something worthwhile with my life.”

Heaton grew up in Chicago, lived in New York and now lives in Somerville, MA, the home of Q Division Studios, which -- only a bike ride away from her home -- is where she recorded Blazing Red (co-produced by Gary Maurer of HEM) as well as her critically acclaimed second release Give In. With her joyous spirit, warm voice and spacious piano playing, Heaton has been called "more of a storyteller than Norah Jones and definitely in the same category as far as talent and vocal range" (Newspapertaxi.com).

Known for the infectious energy of her live performances -- "a natural performer [with] a rich, soaring voice" (The Seattle Times), Heaton tours nationally, playing acoustic venues, coffeehouses, outdoor theaters, rock clubs, and festivals throughout the US. Her music has charted on CMJ and her independent release "Black Notebook" was selected as a Top DIY Pick in Performing Songwriter Magazine. After winning Soul City Cafe -- a national songwriting and live performance competition -- Anne was invited to tour the west coast with major label recording artist Jewel. She has also shared the stage with Melissa Ferrick, HEM, Jill Sobule, and Jonatha Brooke.

"The title 'Blazing Red' comes from the very first song I wrote for the album. The idea that ultimately, you are your soul and not the roles you play and therefore when you want to make changes in your life, you can connect to this power. The image of a setting sun came to mind. Like your soul, the sun is always there, constant, whether it's night time or cloudy, it is there and you can connect to its power for strength."

Recorded mostly live-in-the-studio, Heaton's new record maps personal themes with organic vocals, pop melodies and piano-led arrangements. Heaton expresses feelings of loss and connection, from the desire to, one day, be a good mom, to letting go of past relationships. Co-produced with Gary Maurer (of HEM), the music is at times lush and whimsical -- Heaton is often backed by a string quartet- and alternately intimate, she sings and plays piano only. What is created is a soulful record that gently urges the listener to both take risks and take comfort.

Look for Anne Heaton this fall in support of her new release Blazing Red, a beautiful, simple and mature collection of songs.

Anne is the New York Times Featured Artist of the Week (on their Pop Music Podcast)! Check out the Podcast here: www.nytimes.com/ref/multimedia/podcasts.html

Concertline Music Highlights Anne Heaton by The Chicago Tribune
You can sometimes hear the influences of songwriting mavericks such as Tori Amos, Peter Gabriel and the Indigo Girls in the music of piano-playing singer-songwriter Anne Heaton, but Heaton's tunes...
Anne Heaton by The Washington Post
Nothing would stunt singer-songwriter Anne Heaton's career faster than emotional closure in her personal life or the one she's dreamed up. Happy endings, after all, would make "Give In" a very dull...
Pop Sensibility by The Boston Globe
Singer-songwriter Anne Heaton is halfway through telling a story at the Middle East Upstairs, when suddenly she realizes just how silly and crazy it sounds. She's talking about how in order to...
Anne Heaton's songs are nothing if not evocative. by Cincinnati Citybeat
Anne Heaton's songs are nothing if not evocative. ...Anne Heaton's songs are nothing if not evocative. Possessing a guided passion that never missteps, she brings you close enough to the fire to...
Concert Review, Sunday at Chateau Ste. Michelle by Seattle Times
A pair of rising singer-songwriters opened [Jewel's] show. First off was folksy Anne Heaton, accompanied only by a keyboard and a soaring, rich voice. Though her set was short, clocking in under 20...