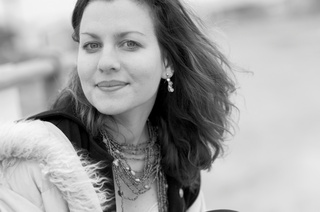 Antje Duvekot has solidified her reputation as one of America’s top emerging singer songwriters with “Big Dream Boulevard” her debut studio release. The CD was produced by Seamus Egan, founder of the Irish super group, SOLAS. The project was released on acclaimed songwriter Ellis Paul’s label, Black Wolf Records and has quickly attracted international attention for Antje. This release was voted “#1 Folk Release of 2006” by the Boston Globe and was named to the “Top10 Releases of the Year” by National Public Radio’s, Folk Alley.

"This is a brilliant, brilliant album.” says former Rolling Stone music editor Dave Marsh. “I have had this reaction once in the last 10 years and that was the first time I heard Patty Griffin.”

“Duvekot has gotten hotter, faster than any local songwriter in recent memory. Her songs feel at once fresh faced and firmly rooted, driven by the whispery sensuality of her voice. She believes in the redemptive power of the shared secret; and is utterly unafraid to mine the darkest corners of her life for songs that turn fear into resilience and isolation into community”. The Boston Globe

Antje has won some of the top songwriting awards including the Grand Prize in the John Lennon Songwriting Competition, the prestigious, Kerrville (TX) “Best New Folk Award” and in one of the nation’s top music markets, she won the Boston Music Award for “Outstanding Folk Act”, three of the top prizes in the singer songwriter world.

Antje has extensive touring experience, criss-crossing the US and Europe several times. She is a compelling live performer and has been invited to play some of the top festivals including The Newport Folk Festival as well as the Mountain Stage, Philadelphia and Kerrville Festivals. Internationally, she's headlined the The Celtic Connections Festival in Scotland and the Tonder Festival in Denmark.

In December of 2007, The Bank of America featured Antje’s song “Merry Go Round” in a national TV advertising campaign seen by millions, including a Super Bowl audience. Antje’s fast growing fan base, the viral spreading of her music and a track record of sold-out shows are a testament to her growing popularity. Neil Dorfsman, the producer of Bob Dylan, Bruce Springsteen and Sting says, "When I first heard Antje I knew I was witnessing something very special. She creates an entire, detailed world in verse, and takes you there with beautiful and understated melody. Her songs are stunning paintings of color and shade and always generate the heat and light that real art should. In an unpoetic and 'in your face' world, she is lyrical and subtle

Outside Perspective by Scott Alarik, Boston Globe
She's about to join Boston's folk community, but songwriter Antje Duvekot hasn't forgotten the loneliness of the outcastIt's difficult to imagine Antje Duvekot becoming a star, even though her...
p
A
n
E
F
Song Title by Artist Name