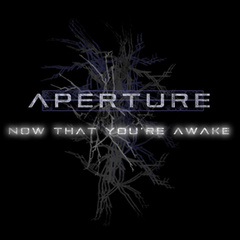 Aperture Bio: Even before the band named itself “Aperture” it’s three founding members, John Thevenot (bass), Jared Mears (guitar), and Justin Frary (drums) worked tirelessly in the practice room for over 2 years writing the musical framework of what would become one of Texas most interesting yet unclassifiable unsigned hard rock acts. For Aperture, perseverance is the key, and it has paid off. ... Late in 2010 they added friend and guitarist Michael Proctor to the group, and almost immediately after found their frontman in San Antonio native Nathan Alvarado, thanks to a late-night Craigslist posting. As Aperture’s debut EP “Now That You’re Awake” dropped in April 2011, they were already playing with big acts like Apocalyptica at the acclaimed White Rabbit in San Antonio, as well as earning radio play and press coverage in both of their hometowns...San Antonio and Austin.

In through the out Aperture by Chris Parker - San Antonio Current
IN THROUGH THE OUT APERTURE: CRAIGSLIST FATHERS A PROG-METAL BROMANCE AND A NEW EPStraddling the line between chunky, breakdown-laden post-grunge and atmospheric, post-metal art rock, Aperture...
Review of Aperture's Now That You're Awake (EP) by Chris Parker
In love with the illusion/Far from serenity," sings Nathan Alvarado on the signature cut, "Of the Sun," off this band's debut EP. If you're sensing a little philosophical angst here, you're not far...
Night After Night by June 16, 2011
Pay attention to Aperture, a band with dual Austin/San Antonio citizenship. Fronted by San Antonio-bred singer Nathan Alvarado, the quintet plays the kind of prog-meets-classic rock that rules in...
p
A
n
E
F
Song Title by Artist Name