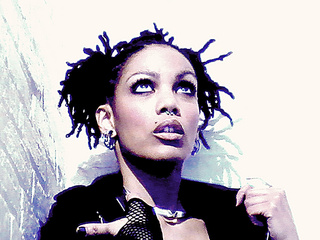 Araena (pronounced a - RAE - na) made her debut in her hometown, New Brunswick, New Jersey. It was through Punk, Poetry, and Songwriting where this eccentric beauty captured an embryonic whirlwind of melodious madness.

On her self titled EP, Araena dares to introduce a futuristic breed of twisted Rock that is seriously Catchy, Cutting Edge, and Clever. She creatively morphs musical barriers, enticing you with rock tunes that are danceable and deceptively delicious. Indeed, Araena’s crazed method of Electronica Influenced Rock is dark and remains Punk and Pogo-Attackable!

“There is so much music today that sounds safe, cloned, and watered down,” says Araena. To listen to her debut EP is to indulge in taboo tributes littered with dirty drums, sick synth effects, and grimy guitar leads. All tunes are laced with a lethal dose of Araena’s own ‘poetized’ lyrical melodies which are delivered with a ‘Cyber Punk’ style edge. “I don’t write music to feel ‘safe’ in a box. I write music because that is where I am the most free to be who I am.”