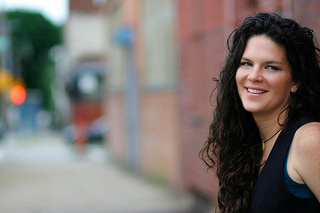 Florida-born singer-songwriter, Ashley Jones started her music career as a student in Tallahassee, FL, then made her way to New York City where she found herself taking the stage at some of the Big Apple's most respected music venues (CB's, The Living Room, The Bitter End, The Knitting Factory). After six years of city living, Ashley's next musical adventure took her across the ocean to Rwanda, where she hoped to capture in song the supernatural hope within the next generation of a country defined by poverty, sickness and genocide. Now she's back in the USA with "Songs About Falling" (her full-length album with hits like "It's Not Love" and "New York is Like a Boyfriend") and the EP she recorded entirely in Rwanda titled "The World Should See Her Face". This artist is extremely musical and has total command over her instruments both vocally and as a guitarist... Jones' straightforward and powerful delivery will certainly continue to win her many fans and solidify her place in the live circuit." --Music Connection Magazine, March 2010

An artist in complete command of her talents. by Ellen Woloshin, Music Connection Magazine
This artist is extremely musical and has total command over her instruments both vocally and as a guitarist. Her guitar work on upbeat songs is spirited and percussive while in softer songs her...
p
A
n
E
F
Song Title by Artist Name