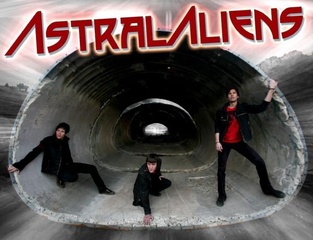 The Australian Rock band ASTRALALIENS, the 2009 Champions of The BATTLE for LOS ANGELES (Winter Series), have just won KROQ’s Battle for LA (Summer Series). The Aussies battled it out against 5 of LA’s other elite bands in the KROQ Grand Finale at The Knitting Factory, Hollywood, on Thursday July 30th. ASTRALALIENS had a flying start on their first trip to Los Angeles just over a year ago, with a huge debut at the Key Club with LA’s top show band, Powder. On their second tour of LA clubs, the band appeared at many of Hollywood’s leading Rock venues, including multiple appearances at The Viper Room (7 times), House of Blues, Key Club, Knitting Factory, Whisky A Go-Go, The Mint, The Derby and other prominent venues. Last month ASTRALALIENS embarked on their third US club tour, which is set to include numerous appearances in Los Angeles and other Southern California cities, as well as throughout California and the Southwestern states of Nevada, Arizona, New Mexico, and Texas. The ASTRALALIENS are getting the attention of a lot of new fans in America, with over 440,000 hits and 560,000+ plays on their Myspace page since their arrival here, and they are now getting ready to showcase for US record companies. The band relishes going up against the competition in “The Battle 4 LA”, as they are no strangers to band contests, having won several of them in their home country. Signed to one of Australia’s leading independent record labels, Wizard Records, the Aussies first rose to prominence Down Under by winning the “Bandfest” rock contest, soon after which they won the "Best Radio-Friendly Band" title at the finals of "ROCKSTAR…The Real Deal!", the rock band search sponsored by Australia’s leading rock radio network, Triple M, and Coca-Cola. They were also the Runners-Up in the Australian Grand Final of the Jim Beam National Band Competition, as well as the Winner of the Queensland State Final of the World Battle Of The Bands contest. ASTRALALIENS consists of the brothers Jakob Fehres (vocals/bass) & Mablo Fehres (vocals/guitar), and American singer/lead guitarist Eric Slater, who recently moved to Queensland, Australia. The Fehres brothers and Slater are seasoned Karate practitioners, and martial arts katas and the Australian Aboriginal didgeridoo form an integral part of the ASTRALALIENS’ unique stage performances. ASTRALALIENS’ newest member, Australian drummer Dan O’Connell (“Dan O”) arrived from Brisbane, Australia 3 weeks ago, just in time to be thrust into KROQ’s Summer Series Battle for LA. ASTRALALIENS is the latest in a long line of major Australian artists who were discovered, produced and launched in Australia and Internationally by Wizard Records. Those artists, including Marcia Hines, Air Supply, Daddy Cool, Rick Springfield. Tommy Emmanuel, have sold over 50 million records around the world. Wizard recently took another Australian band, Porcelain, to the U.S., signing them to a multi-album world-wide deal with Universal Records, and Wizard is hot on the trail of doing the same with the ASTRALALIENS. Don’t miss the band that Los Angeles clubs are hailing as “Australia’s Hottest New Band” …ASTRALALIENS!

What are the minimum stage dimensions and are there any special requirements?
**We can fit on any stage!

Do you need guitar or bass amps?
**We have our own backline.

Do you need outboard gear such as compressors, equalizers, delays and reverbs? Specify preferences.
**Reverb on Vocals if available.

Do you need stage monitors. How many?
**Yes, 4 if possible.

Do you need any lighting?
**Lighting available at the venues always adds to a great rock show.

Do you need a sound technician?
**No.

Do you need stagehands?
**No.

Do you need a dressing room?
**Yes, if available, otherwise we'll change in the car!

Do you require arrangements for transportation and accommodation. For how many people?
**Only if we are playing outside Brisbane, Australia, or outside Los Angeles - For 5 people.

AstralAliens in Music Connection by Music Connection
AstralAliens' article in LA's No.1 Music Source mag, Music Connection.CHECK IT OUT BELOW...Thanks very much to Bernaud Baur
CHAMPIONS OF 2009 'BATTLE 4 LOS ANGELES' by
Q MUSIC ARTICLE - CHAMPIONS OF 2009 'BATTLE 4 LOS ANGELES' BAND COMPETITION RETURN HOMECHAMPIONS OF THE 2009 'BATTLE FOR LOS ANGELES' BAND COMPETITION RETURN HOME. Brisbane-based Rock band,...
"RAVE meets ASTRALALIENS" by
RAVE MAGAZINE - "RAVE meets Brisbane/LA power pop quartet ASTRALALIENSRAVE: What’s the scene in LA like for a young Australian band?JAKE FEHRES: Eye opening. You are in the middle of it all....
"INDEPENDENCE DAY" by
TIMEOFF MAGAZINE - "INDEPENDENCE DAY" ArticleINDEPENDENCE DAY BRISBANE’S ASTRALALIENS HAVE SPENT THE PAST YEAR WINNING ACCLAIM FROM LOS ANGELES AUDIENCES. MATT O’NEILL MANAGED TO CATCH UP WITH THE...
Aliens Landing by
Aliens LandingThe band AstralAliens touches down at Ground Zero for the UnderGround Concert at 7 p.m.by Jen WinstonPhoto courtesy of the AstralAliens What happens when you mix heavy guitars, the...