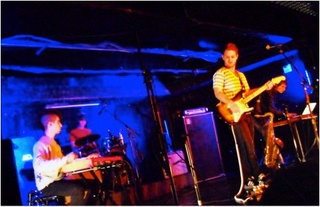 Formed in the summer of 2009, Atypicals fuse various influences of psychedelic rock, jazz, and their love of modern electropop and house into their music, creating a sound entirely their own: infectious, cutting-edge electronica that stimulates mind and body.

ATYPICALS – LOVE ELECTRIC SOUL by umstrum.com
Hailing from Cleveland, here come the Atypicals, a young electro band led by Adam Zucker on vocals. They perform both as a full live band, with Jacob Bergson on keyboards, James Muschler on drums...
Technique Electrique by maven.ly
CMJ kicked off last night in fashion at the GigMaven Technique Electrique show. We selected all of the bands through Gigmaven, and they provided an amazing showcase.AtypicalsForgive the...
Atypicals: The Art of Being Amorphic by Sherene Hilal (bestnewbands.com)
Things that are "atypical": Finding a cab in midtown when it's raining? Check. Finding your phone after losing it in any bar in Meatpacking? Check. Finding a band that effortlessly mixes in the...
Footage from Gigmaven's CMJ by maven.ly
Hey all, our friends from Atypicals submitted this footage they put together from our CMJ showcase at Canal Room. Check it out! Good work guys
Atypicals – Venus (DIGIRAATII RMXX) by themusicninja.com
Who doesn’t love a nice remix on a Friday afternoon? Nobody, that’s who. So on that note, it gives us great pleasure to offer up to you a pretty nice tune from Brooklyn’s Atypicals that gets a...
In Defense of Simplicity by uhohdisco.com
I had a friend in high school who only listened to music that was technically difficult to play, mostly jazz or The Mars Volta. He preferred time signatures that were hard to drum along too, long...
Digiraatii (Electro : Cleveland, OH) by vacayvitamins.com
Alright Vacayers I know I’ve been M.I.A. lately but I’m out of my spring break coma and back in action. As a result of my recent Hiatus you can expect a lot of activity in the near future. Ill be...
p
A
n
E
F
Song Title by Artist Name