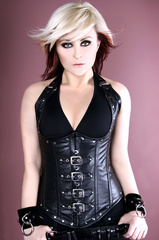 The sound of Avian X, Natalia Ivachkevitch's foray into the glamorous world of NYC Synth Pop, provides the link between Madonna and The Sounds.

NEXT BIG THING REVIEW by Next Big Thing Blog
Electrosoul – Natalia (Independent Release)One genre welcomed for its return, in my Indie heart at least, is the crafted sad/happy electro pop. Its seemingly easy tingle-tangle of heartbreak and...
ARJANWRITES.COM by arjanwrites.com
Natalia bring a sense of Eastern Europe flair to her music. Like a true ice queen, Natalia stays true to form on "Electrosoul V2." Her potent blend of pop, rock and dance is theatrical, grand and...
DARK CIRCLES 'Designer Drugs Remix" by Hypem.com
Who exactly is this Avian X? Known by her given name in some [dark] circles, Natalia Ivachkevitch is Russian born but resides in Connecticut now. She is trilingual (English, Russian and Polish),...
DARK CIRCLES by AVIAN X (Designer Drugs Remix) by Penned Madness
Dem boys are at it again, Michael and Theo of Designer Drugs are back with a new dancefloor killer, "Dark Circles." Originally by Tri-State area heart stopper, Avian X, "Dark Circles" by DD is a...
HIGH VOLTAGE MAGAZINE by HIGH VOLTAGE MAGAZINE
Finally, high school cheerleaders and burgeoning scenesters have something to bond over. The sound of Avian X, Natalia Ivachkevitch's foray into the glamorous world of NYC Synth Pop, provides the...