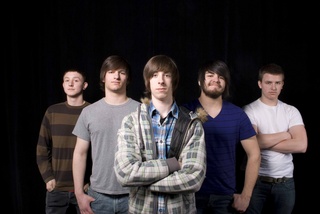 Formed in the Winter of 2006, you'd think the members of Awake the Storm were born with instruments in their hands. Founding members, Joe on drums, Felipe on guitar, and Nick on bass, decided to take their love and inspiration for music to the same level as those who were creating what they were so passionate about; and decided to start a band. After a few line up arrangements, such as moving Nick to vocals, joining Austin on guitar, and adding Ian on bass, they began their writing process as they drew influence from an array of bands from across the spectrum. They started to produce an eclectic hardcore sound, that was unique in the meaning and melody behind it. Starting strong, their first show was opening for Endwell and Beneath the Sky. One last lineup change then occurred as Ian left the band in pursuit of a different musical direction. The answer to their prayers arrived as Brian filled the missing spot on bass creating the solid lineup that makes Awake the Storm as you know it today. Soon following, they lined up shows with major acts such as The Black Dahlia Murder, Hatebreed, As Blood Runs Black, Emmure, Carnifex and many more. Awake the Storm will capture you with their energetic and hardcore live shows, and keep you with their ever turning mechanics which won't fail to produce more and more musical genius. This band puts their heart and soul into every song, performance, and note they play; and they won't settle for anything less.