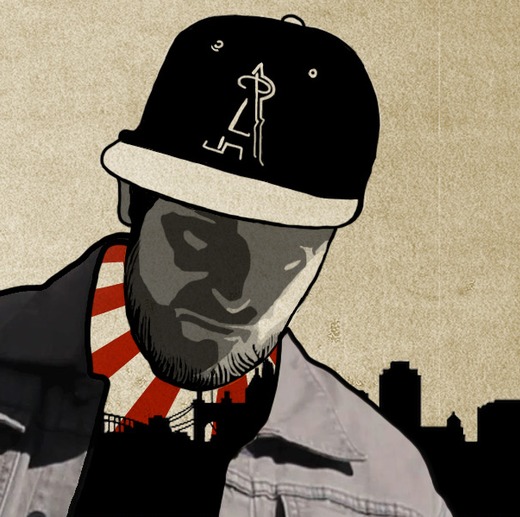 25 Topics with AWKWORD: The Definitive Biography

“Anything a writer writes should be written with the urgency of someone holding a gun in their mouth.” — Maya Angelou

“If they give you ruled paper, write the other way.” — Juan Ramón Jiménez

“I’d rather be hissed at for a good verse than applauded for a bad one.” — Victor Hugo

“One of our favorite up-and-coming emcees… even more than his good deeds, it’s his music.” — Genius

02. AWKWORD is married to a Dominican American woman and has two (inherited) daughters, ages 10 and 13.

03. AWKWORD has a Bachelor of Arts degree in Sociology from Vassar College; he focused on criminal justice, and wrote his senior thesis on Homelessness and the Politics of Public Space. He has also successfully applied for two grants for arts and education.

04. AWKWORD is co-signed by Chuck D of Public Enemy, and a number of well-respected industry vets.

06. AWKWORD has been listening to rap music as long as he can remember.

07. AWKWORD attributes much of his passion to an innate, unstoppable empathy and drive for justice, as well as his own inner demons that previously led to fistfights and run-ins with the Law.

08. AWKWORD considers Hip Hop to be his savior, especially following the loss of his mother to breast cancer in 2012.

09. AWKWORD has suffered from mental illness and drug addiction.

10. AWKWORD is a lifelong activist for social justice. He has organized in communities, led protests, volunteered locally, lobbied Congress, and dedicated his life to creating EDUCATIONAL Hip Hop music (AKA #HipHopEd).

11. AWKWORD donates most of the money he earns from rap music to charity.

12. AWKWORD is the creator of 100% for-charity global Hip Hop album, World View, which features contributions from six continents and 16 countries, and from which all proceeds are donated to Guns 4 Cameras, a 501c3-registered nonprofit that strives to end gun and gang violence through the Hip Hop-inspired education and empowerment of ‘at-risk’ youth.

13. AWKWORD continues to focus on the transformative power of Hip Hop — by connecting us internationally through thought, sound and sight.

14. AWKWORD was a graffiti artist before he started rapping.

15. AWKWORD has been a writer for as long as he can remember — from scribbling lines in his pocket notebook at the dinner table to scoring a 780 (out of 800) on the SAT II, without finishing the test.

16. AWKWORD wrote and performed spoken word poetry (e.g., at the Nuyorican) before shifting to songwriting and rapping. He performed live for the first time in 1999, as the MC of an inaugural (now annual) conference he developed for his high school alongside the Anti-Defamation League; he has since performed with Hip Hop Pantsula [of South Africa], The Cool Kids, Masta Ace, Grandmaster Caz, J-Live, Asheru, Eddie B & Harry Fraud, QN5, PumpkinHead, Dujeous, and others.

21. AWKWORD has been interviewed/featured by The Village Voice, We Are Change, Rap Genius, MTV, BLUNTIQ, DeadEndHipHop, The Halftime Show with DJ Eclipse, The Library with Tim Einenkel for Chuck D’s …AndYouDon’tStop! Radio, All Around Africa [of Kenya], Green Left Weekly [of Australia], Hip Hop Breath [of France], Juice Magazin [of Germany], HHKMag [of UK], and many more.

23. AWKWORD is working on three one emcee-one producer EPs: with Jakk Wonders (FKA The Militia) of South Africa; Trilian of Serbia; and Teck-Zilla of Canada. The Best of AWKWORD, sponsored by The Hitmen and ItsBizkit.com, is available now.

24. AWKWORD premiered his latest international Hip Hop effort, “I Am”, on February 9, 2016, through HipHopDX, after radio premiering it on Chuck D’s …AndYouDon’tStop! radio show. As part of his ongoing effort to connect us worldwide through Hip Hop music and culture, as well as showcase the Motherland, the Diaspora and women in Hip Hop, AWKWORD connected with Nigerian-born Canadian producer Teck-Zilla, Nigerian songstress Maka and French DJ J Hart to recruit an All-Star cast of emcees to join him on “I Am,” including Latasha Alcindor (USA), Holstar (Zambia), Wakazi (Tanzania), Five Steez (Jamaica), Modenine (Nigeria), The Assembly (South Africa), and Third Eye (Malawi). Aptly entitled, the song features 9 emcees sharing truths about their lives in their respective home countries across Africa, the Caribbean and the United States. “I Am” has been featured by MTV Africa, among other top sites worldwide. AWKWORD is currently raising money through a GoFundMe campaign and through his bandcamp so the crew can film a Music Video for the song, across nine countries and four continents.

25. AWKWORD is not only an artist and activist, he also interviews and writes/blogs about artists, activists, society, politics and urban culture. He has previously written for Mass Appeal, YRB Magazine, Elemental Magazine, Fly Paper, RIME, PleaseDontStare.com, etc.; he now publishes content via Praverb.net. For samples, click here.