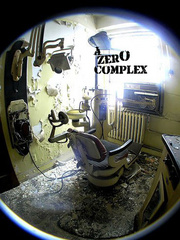 A Zero Complex is a Philly-area five piece band with an appreciation for rock music that is good—be it indie, progressive, pop, post-hardcore, post-post hardcore, pre-post-hardcore, post-pre-hardcore or just plain old core. Hell, they’ll even give the occasional emo song props if it has a good hook. Their myriad influences would never fit onto the prescribed “one sheet,” but a small sampling would include Minus the Bear, the Foo Fighters, Thrice, Glassjaw, Coheed and Cambria, The Police, U2, The Velvet Teen, and The Shins.

Although their untitled debut EP was recorded in late 2006, the band’s current lineup has only been together since spring of 2007, when they recruited guitarist Alejandro Torres and keyboardist Tim Campbell. Their combined stage experience includes Philadelphia rooms like Grape Street, Abilene’s, the Fire, and Doc Watson’s, as well as Asbury Park’s legendary The Saint.